TOYOTA GAZOO Racing WRC Challenge Program driver Takamoto Katsuta impressed with his speed on the debut of the Croatia Rally in the FIA World Rally Championship, claiming two stage wins as well as taking his third top-six finish in a row in the Toyota Yaris WRC.

As well as being an all-new event for the WRC, the Croatia Rally was the first pure asphalt event to be held as part of the series since Rallye Deutschland in August 2019: the rally in which Katsuta made his first appearance at rallying’s top level. The event was characterised by numerous different types of asphalt – often in the same stage – and also by the amount of dirt and gravel dragged onto the road with each passing car. As on all asphalt rallies, Katsuta and co-driver Dan Barritt could rely on the additional information coming from their route-note crew of Juho Hänninen (who also serves as Katsuta’s coach) and Craig Parry, who passed through each stage in advance to check the road conditions.

On the opening day on Friday, Katsuta adapted well to the unfamiliar roads while also getting to grips with the new-for-2021 Pirelli tyres, although a missed junction in SS4 and a spin SS6 cost him around one minute in total. On Saturday while running first on the road he showed fantastic pace in many of the stages, going quicker than anybody else on SS10 and repeating that feat on the second pass on SS14. He continued to show top-five pace on Sunday morning as he moved up into sixth overall.

Quotes:
Takamoto Katsuta:“I’m pretty happy about this weekend. Of course, some stage times were very good, but I’m not so happy about my performance at some other times. So it’s quite up and down, but this is part of the learning to become a better driver. The two stage wins on Saturday were very good and especially on the second loop because then I had similar conditions to the other drivers behind. Compared to Friday it was a big step and I think this just came with experience. I hadn’t driven on these sort of roads much before this rally so I had not so much confidence and I couldn’t know what was going to happen. With every stage I was learning and that was making me more comfortable and confident. Thank you to my gravel crew Juho and Craig and to the whole team.”

Juho Hänninen (TOYOTA GAZOO Racing WRC Challenge Program instructor):“I’m really happy with what Taka did on this rally. Before the event, he had not driven so much with the new tyres and on dry asphalt with the Yaris. We could see that in the stage times: When the grip on the road was a bit lower he was still hesitating a bit and not fully confident. But on Saturday we saw that when there’s better grip on the road, that he could win the same stage twice. On the second pass it was certainly more difficult because there was a lot more gravel on the road. When we go to Ypres for the next asphalt rally, there will be a lot of low-grip stages and gravel coming from the cuts. So there’s plenty to take from Croatia to Belgium: On one side how we as a gravel crew work with Taka and finding the right balance of how much detail to mark in his pacenotes, and at the same time to improve his confidence on low-grip roads.”

Round four of the 2021 season will be the first gravel event of the year: Rally de Portugal (May 20-23). Based in Matosinhos near Porto in the north of the country, it features classic stages on sandy and rocky roads. 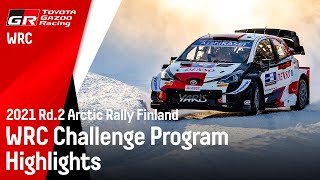