The Safari was returning to the WRC calendar for the first time since 2002, and while the distances covered were shorter than previously and similar to a regular WRC round, the event still lived up to its old reputation as an incredibly demanding rally. The stages combined long high-speed stretches with very technical and rough sections that demanded a lot from the crews and the modern generation of World Rally Cars.

As such, the event had a high rate of attrition, especially during the first full day on Friday, but Katsuta – co-driven by Dan Barritt – performed brilliantly to avoid trouble while also showing a good level of pace. In Friday’s final stage he shared the fastest time with Ogier and moved up to second overall, only 18.8 seconds from the leader.

He continued to show great consistency through Saturday’s six stages to maintain his second place, and his driving was rewarded on Sunday’s opening test when the erstwhile leader hit trouble and was forced to retire. This promoted Katsuta into the lead, albeit with Ogier now right behind him. With two stages remaining, the two drivers were tied with the same overall time, after Katsuta matched Ogier’s cautious approach through a very rocky SS16.

Ogier’s seventh stage win of the weekend in the subsequent test allowed him to open up a gap to Katsuta, and while there were no team orders preventing him from battling for the win, Katsuta drove quickly and safely in the final stage to secure his momentous result. He became the first Japanese driver to finish on the podium of a WRC round since the 1994 Safari Rally, and his success on the event for Toyota follows that of compatriot Yoshio Fujimoto, who won the 1995 event that was part of FIA 2-Litre World Rally Cup that season.

The result is also a significant one for the TGR WRC Challenge Program, which has guided Katsuta’s path to the top level of rallying since it was established in 2015 to discover and support Japanese rallying talent.

Katsuta is fifth in the championship at the halfway stage of the season, and is now the only driver to have finished every round this season inside the top six.

Quotes:
Takamoto Katsuta:“I’m feeling very good to have achieved this podium. It has been a really long weekend with a lot of things happening. Everybody has had some problems but we survived and that’s why we are in this position. I must be happy with this result. I did not expect to finish on the podium on the Safari because this rally is very special and all the top-level guys are so experienced. I expected it to be a tougher weekend for us but I’m really happy. I can still improve and hopefully in the future I can match Seb and win rallies. Thanks to the WRC Challenge Program because without it I would not be here: It has helped me to develop from nothing, so thanks to Toyota and to Akio Toyoda, and to the whole team.”

Jari-Matti Latvala (TOYOTA GAZOO Racing World Rally Team Principal):“For Takamoto to finish in second place on Safari Rally Kenya and take his first WRC podium finish is an absolutely amazing result. With this we can see that the WRC Challenge Program set up by TOYOTA GAZOO Racing has really paid off. The steps that Taka has been taking recently have been so impressive. He did not make any big mistakes on this event and handled everything really well, including the battle with Sébastien on the final day. He really deserves this and I’m really happy for him.”

Rally Estonia (July 15-18) takes place over fast and smooth gravel roads with many crests and jumps, as well as some more technical sections. 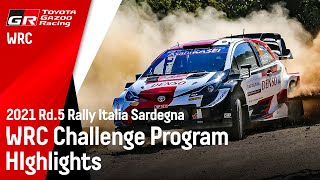