Ever since arriving on the scene in 1966, the Corolla has helped elevate Toyota, including playing an active role ever since Toyota’s early days of participation in motorsports, with the TE25 Corolla earning Toyota’s first World Rally Championship＊2 victory in 1973 and the Corolla Levin winning the 1,000 Lakes Rally＊3 in 1975. The Corolla’s driving performance has been embraced by many customers, and the model has evolved with the times into a station wagon and SUV, among others, to become a versatile choice throughout its customers’ life stages. The recently premiered GR Corolla sprang to life based on the strong desire of President Toyoda to “absolutely prevent the Corolla—especially because it is widely loved—from becoming a simple commodity and bring back a Corolla that captivates our customers”.

The development of the GR Corolla carried forth the torch of making ever-better motorsports-bred cars, which focuses on honing cars to win races and making them commercially available. While under development, the GR Corolla was fitted with a hydrogen engine and raced in the Super Taikyu Series*4 to comprehensively hone a hydrogen engine, which comprises new technologies, as well as the car. Also, to pursue an untamed energy that captivates customers, a team of professional drivers, in-house evaluators, engineers, and mechanics, centered on Master Driver Toyoda, rigorously put the car through its paces on a variety of roads. This enabled the developers to expose defects and repeatedly make improvements, culminating in a car that interacts with the driver and powers the urge to keep on driving.

Click here for a video tracing the development of the GR Corolla;
URL：https://www.youtube.com/watch?v=l-ey4lq6Y64

The GR Corolla Morizo Edition was developed based on President Toyoda’s discerning resolve to achieve an untamed energy that captivates customers. Thorough weight reduction, increased engine torque, and optimized transmission gear ratios, combined with improved cornering execution through the use of monotube shock absorbers and high-performance tires, have achieved enhanced dynamic performance for a driving taste that excites and that powers the urge to keep on driving.

＊1 Details on the limited number of units to be available and the reservation lottery procedure are to be provided at a later date via the following URL: https://toyotagazooracing.com/gr/corolla/

＊2 The Press On Regardless rally held in the United States

＊4 Participation using a hydrogen engine-equipped Corolla in the Super Taikyu Series started in 2021 with Round 3 under the banner of ROOKIE Racing. Toward realizing motorsports that are carbon-neutral and sustainable, the goal is to hone, through motorsports, hydrogen engine technologies, which represent a new power source option.

＊5 Ultrasuede® is a registered trademark of Toray Industries, Inc.

＊6 Torsen® is a registered trademark of JTEKT Corporation 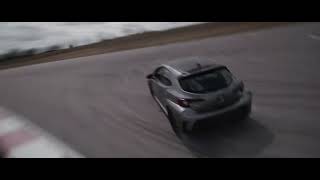