Ogier had been on course to claim a record-extending ninth win on the famous event before a cruel late twist in the thrilling weekend-long battle for the victory, suffering a flat front-left tyre on the penultimate stage of the rally. The time lost turned his lead of 24.6 seconds into a deficit of 9.5s. Along with new co-driver Benjamin Veillas, Ogier gave his all in the final stage and, having been handed a 10-second penalty for a jump start, finished just 10.5s from the win.

Fourth was an impressive result for Rovanperä and his co-driver Jonne Halttunen, who made huge strides forward in pace and confidence in their new car from Saturday onwards. In all they claimed three stage wins, including on the rally-ending Power Stage. The five bonus points put Rovanperä third in the championship as the leading full-season contender, with Ogier to contest selected events this year after stepping away from full-time competition.

Elfyn Evans was also in the battle for the lead until he went off the road on Saturday’s SS11 and lost 20 minutes. On the final day he set his sights on scoring bonus points in the Power Stage and completed a one-two in the stage for the GR YARIS Rally1.

All three of the team’s drivers claimed stage wins over the weekend and the car was fastest on nine of the 17 stages. It demonstrated both impressive performance and reliability despite the challenges of the new Rally1 regulations, which included the introduction of hybrid power to rallying’s top level for the first time. In Monaco to join the team and witness the GR YARIS Rally1’s successful debut was Kazuki Nakajima, the recently-appointed Vice Chairman of TOYOTA GAZOO Racing Europe.

Quotes:
Akio Toyoda (Team Founder)
“It was so close for Seb to achieve his ninth victory in Rallye Monte-Carlo, but I was happy to see that the cooperation with his new co-driver, Benjamin, seemed to be working well. His driving feeling with our new partner, the GR YARIS Rally1, also seemed to be fairly good. This new partner is an electrified car following the new regulations to make this sport more sustainable. I assume it required delicate handling despite its strong power, but Seb quickly made friends with despite it being slightly difficult. I respect him for being able to make friends right away. Also, I would like to express my respect to the leadership of the FIA, WRC Promoter, and all others involved in the preparations as they have helped this historic and traditional World Rally Championship move toward the realisation of carbon-neutrality with electrified cars and new fuel.

Our other crews seemed to be struggling a bit with our new partner, but it was great that a TGR driver set the best time in all stages on Day 3. How well our crew and GR YARIS Rally1 cars are going to get along event by event is something new to look forward to this season, although I still feel something is missing when I see the rally cars leaving the service park quietly.

The base car of our rally car was Yaris until last year, and it changed to GR Yaris from this year. GR Yaris is a production sports car that we, Toyota, made by ourselves to win in motorsports. The car has finally started the real competition stage now. I’m so glad, and I would like to thank everyone who has worked together with me to build GR Yaris. I know that the members who built GR YARIS Rally1 from the GR Yaris also went through a lot of troubles and worked very hard. I have to sincerely thank all members in Finland led by Jari-Matti, and all members in Cologne. The season has just begun and I believe we can continue the good work together.

To the fans, I appreciate your continued support for TOYOTA GAZOO Racing World Rally Team this season. Thank you very much.

P.S.
To the fans and spectators who helped Elfyn and Takamoto on the stages. I watched the videos on social media. Thanks to your big help, two cars were able to continue the rally. Thank you so much!”

Jari-Matti Latvala (Team Principal)
“For sure there is some disappointment in this moment because we were so close to winning, but this is motorsport sometimes and we have to accept it. The most important thing is that we know we have a car that is capable of winning and a car which is reliable and this gives us the strength to look to the future and the rest of the season. Seb did a really good job and unfortunately he just didn’t have luck on his side today. Kalle has improved so much from the beginning of the rally and he did a really great Power Stage today. Elfyn also showed great performance here, just with a small mistake yesterday, but he also did a good drive in the Power Stage which helps us in the championship. I want to say congratulations to M-Sport and Ford, because it is nice to be competing at the front with them again, and also to Sébastien Loeb for an amazing achievement; it was an incredible battle this weekend that I know the fans really enjoyed.”

Sébastien Ogier (Driver car 1)
“It has been a huge joy to compete in this special rally again and to be in this incredible fight. This weekend we don’t come out as the winner but we can definitely keep our head up. Together with Benjamin and the team we did the job. We have done a great performance over the weekend and there were no issues on the car, which is a fantastic achievement. Fate decided differently today but I’m still smiling and I still enjoyed this fight very much. Honestly I feel there was nothing I could do about what happened on the penultimate stage. It was a cut I avoided on the first pass but on the second pass it was impossible to avoid, it was very dirty and I had to follow the line of the others. But well done to Sébastien and Isabelle for the victory, they have done a remarkable performance and it was a very tough fight. It’s been a good weekend for the sport.”

Elfyn Evans (Driver car 33)
“It’s been an encouraging weekend in some ways but it’s massively frustrating to make the error that was so costly yesterday. I had a good feeling in the car but that doesn’t count for much because we finish the rally with very few points, which is a disappointment. I had a pretty good run in the Power Stage but maybe towards the end I didn’t make the most of the hybrid system in the tricky conditions. Overall the team has done a really good job. We didn't have a lot of testing but I found a much happier place with the car during the event. I think it performed really well without any issues, so a big thank you to the team.”

Kalle Rovanperä (Driver car 69)
“I am really happy to see the progress we made during the rally. I didn’t really know what was happening at the beginning but we believed in ourselves, pushed hard and found a good pace in the car. We did everything we could and finally got the setup much better and I could start to learn the car myself. I have to say big thanks to my engineer for pushing with me and doing big changes to the car. So it was a really positive weekend in the end and we could do a good run in the Power Stage also. It’s important to get all the points we can so it’s nice to be in this position, even if it means we will be cleaning the road in Sweden. That’s going to be a bit tricky but we will do our best to be ready for that.”

What's next?
Rally Sweden (February 24-27) is the only full winter event of the season taking place on snow and ice. This year the event moves further north to a new base in Umeå meaning all of the stages will be new to the drivers. Metal studs inserted into the tyres bite into the ice to provide grip and allow for some of the highest speeds of the year. 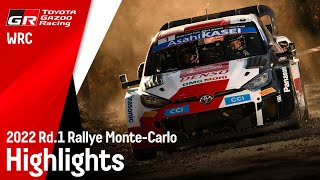