The TOYOTA GAZOO Racing World Rally Team occupies first, second and fourth position at Rally Sweden with one day remaining after a strong performance with the GR YARIS Rally1 car throughout Saturday. Kalle Rovanperä leads by 8.3 seconds ahead of team-mate Elfyn Evans, while Esapekka Lappi is fourth and still in the fight for a podium place.

The top four were separated by only 8.8s on Friday night and and that gap closed to just 3.2s after the first of Saturday’s six stages. Evans led a Toyota lock-out of the top four positions there on the technical Brattby stage, while Rovanperä reclaimed the overall lead – which he then extended with a stage win on the high-speed Långed test that followed.

Having moved up to second overall, Evans started the afternoon by winning the repeat of Brattby and closing to within 1.2s of Rovanperä, who responded by posting the best time in the second pass over Långed – this time in the dark. Rovanperä finished the day with another stage win on the final test into Umeå to increase his lead.

Lappi has continued to perform strongly on his first outing for the team since 2018, and joined his team-mates inside the top three on the overall leaderboard at the end of the morning loop. He concluded the day 4.2s away from third position.

There are now four GR YARIS Rally1 drivers inside the top five with Takamoto Katsuta gaining fifth position following a consistently strong performance throughout the day in his TGR WRT Next Generation entry.

Quotes:
Jari-Matti Latvala (Team Principal)
“I really enjoyed following the close battles involving our drivers today. Kalle has been showing again that he is really strong when he is in this kind of position. He did an amazing time in the penultimate stage, and time differences like that are not easy to make on such a fast rally. He’s in a strong positon, and of course Elfyn is there not too far behind: As usual, we want them to have a fair fight to the finish. Esapekka is up there as well and hopefully can put up a good fight for third tomorrow. Finally, it was a really positive day for Taka as well, so overall we can be really really happy with today.”

Elfyn Evans (Driver car 33)
“It’s been good fun today, the car has generally been working well and I have really enjoyed it. It’s not been bad from my side, just a few errors here and there. Kalle’s done very well, he’s had a little edge on some stages and grown his advantage this afternoon. But it’s still pretty tight going into tomorrow. We’re going to keep trying to do our best and it’s not over until it’s over. ”

Kalle Rovanperä (Driver car 69)
“ Overall it was a nice day and we have to be happy tonight to be where we are. The first stage of the loop seemed to be a little bit difficult for us compared to our rivals. But we were able to fight back well in the second stage on both loops. It’s good to be leading but the gap is still really small, so we need to keep pushing hard from the start tomorrow morning.”

Esapekka Lappi (Driver car 4)
”The car has been working well today, the feeling was really good and better than yesterday. We’ve been consistent, but just losing a little bit of time on each stage to our team-mates. We just seem to be missing a little bit at the moment, but it’s just very small details with the car, and maybe I just need more kilometres. We will keep pushing until the end tomorrow.”

What's next?
Sunday’s final leg of the rally is made up of a pair of stages run twice, located to the north-west of the service park in Umeå and both measuring 14 kilometres in length. The second stage, Sarsjöliden, will host the rally-ending Power Stage with bonus championship points on offer. 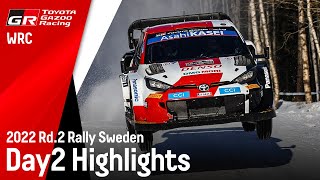