Kalle Rovanperä and the GR YARIS Rally1 dominated in extremely demanding conditions on the first day of the Croatia Rally, opening up a lead of over one minute on the competition.

Rain in the morning and the afternoon made the already-slippery asphalt stages near Zagreb even more challenging, with Pirelli’s full wet tyres being the order of the day. Championship leader Rovanperä made the most of his position running first on the road, which provided the cleanest conditions. Still, he had to face constant grip changes as well as standing water and fog, and in the afternoon encountered plenty of mud on the road during the second pass of the stages. Despite this, he managed to win three out of four stages in both loops. His performance also belied his lack of experience of the Croatian stages having retired early on last year’s event. He ends the day 1m04s ahead of his nearest rival.

Facing unfavourable conditons running further down the road order, Elfyn Evans recorded the fastest time in SS3 but also lost close to two minutes during the morning loop after twice finishing a stage with a tyre off its rim. In the afternoon he moved up to sixth place, and is 10.6s away from fifth overnight. He is one place ahead of Takamoto Katsuta, who’s driving a fourth GR YARIS Rally1 car for TGR WRT Next Generation.

Esapekka Lappi’s day came to an early end when he made contact with a large rock beside the road in the opening stage, causing damage to the front-right suspension. Following repairs by the team, he will restart tomorrow.

Quotes:
Jari-Matti Latvala (Team Principal)
“It’s very rare to have a rally with such difficult conditions as we saw today, and when it’s like this it’s often pretty eventful. So we must be really happy to have a car in the lead at the end of the day. Kalle has been driving extremely well. We didn’t expect this performance from him because last year he only did five kilometres of the rally, so we’re delighted to see this level of confidence and commitment from him. For our other drivers there have been difficulties. For Elfyn it’s been difficult to build up the rhythm with the issues he had this morning but he’s still there fighting for the top five. It was a pity Esapekka had to stop in the first stage but hopefully he can gain valuable experience and confidence tomorrow.”

Elfyn Evans (Driver car 33)
“Today has been pretty difficult. We knew it would be a challenge running near the back of the field in these conditions, and to twice have tyres off the rim this morning was really not ideal. That was possibly down to the cuts in the corners getting worse as more cars go through, and with mud all over the road there’s little to no choice: You either have to slow down massively or take the cuts. SS3 on the other hand was a bit cleaner with a lot less cutting, so we weren’t affected so much by the dirt coming from those ahead. I found myself being quite careful this afternoon and that obviously hasn’t helped the times. I’m looking forward to going again tomorrow although I’m not expecting it to be fully dry with all the rain we’ve had.”

Kalle Rovanperä (Driver car 69)
“It’s been a really good day for us. This morning we tried to really use our starting position which we knew could be good for these conditions. This afternoon it was a lot more dirty, as we expected. All the cuts were very muddy so I don’t think it was then such a big difference being first on the road. On some stages there was a lot of fog and rain and we could still push quite well and set some nice times. It’s nice to be leading but tomorrow is a long day, anything can happen and we’ll need to keep up our pace to maintain the concentration and avoid problems. Hopefully the conditions should be drier and a bit more enjoyable.”

Esapekka Lappi (Driver car 4)
“The first stage this morning started OK. Then there was a combination of left and right corners, and in the left there was a big cut with a lot of mud. So for the right-hander I thought the tyres would be muddy, and I turned in a bit too early and touched this large rock at the side of the road, which unfortunately broke our suspension. It was quite a stupid thing to do and quite frustrating to lose the chance of a good result so early. But thanks to the team for fixing the car for tomorrow: I’m looking forward to doing some more kilometres because I had a really good feeling yesterday in the shakedown.”

What's next?
Saturday follows a similar format to Friday with four stages run twice either side of midday service. Three of these stages are in familiar territory just to the south-west of Zagreb, but there is also a longer trip west towards the Adriatic coast near Rijeka for the new Platak stage. 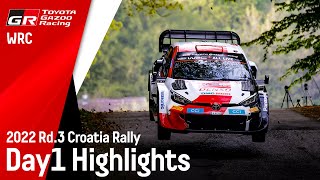