The TOYOTA GAZOO Racing World Rally Team holds first and second overall with Elfyn Evans and Kalle Rovanperä respectively after a demanding first day of gravel competition in 2022 at the Rally de Portugal.

After Thursday night’s opening street stage in Coimbra, the crews faced a long day of eight stages – their first on gravel with the new generation hybrid Rally1 cars – without a full service in the middle, only a tyre-fitting zone. The morning loop of three stages around Arganil was very closely fought with only 20 seconds covering the top 10 drivers.

Evans provided a strong start to the day for the team, winning the opening two stages and ending the loop only half a second from the lead. As championship leader, Rovanperä was tasked with opening the road and sweeping the loose gravel for his rivals, but minimised his time loss and was joint fourth overall with Sébastien Ogier close behind in sixth on his first WRC appearance since January’s Rallye Monte-Carlo.

The afternoon loop was highly attritional, with the initially soft and sandy surface having become rocky and rutted for the second pass. Ogier won SS5 but then suffered consecutive flat tyres in the next two stages and had to end his day early with no remaining spares. He is set to restart tomorrow morning.

Evans reclaimed the rally lead in SS5 before winning SS6. Rovanperä faced a difficult start to the afternoon with the conditions but went on to win both SS7 and SS8 ahead of Evans as he climbed up to second overall. Evans then took a fourth stage win in the Lousada super special that rounded out the day, with 13.6s separating him and Rovanperä at the top of the leaderboard overnight.

Takamoto Katsuta enjoyed a strong day in his TGR WRT Next Generation entry, keeping out of trouble aside from a brief spin in SS6 before he went on to set the third-fastest times in both SS7 and SS8, completing a lock-out of the top three times in those tests for the GR YARIS Rally1, which has so far proven fast and reliable. Those times brought Katsuta up to fourth overall, 5.2s from third-placed Dani Sordo (Hyundai).

Quotes:
Jari-Matti Latvala (Team Principal)
“It has been a great first day on gravel for the GR YARIS Rally1. With six stage wins, we can see the performance has been good and we haven’t had any technical problems with the car. Elfyn started the day with an amazing time on the first stage this morning and he has been very consistent since then. Kalle has done an amazing job opening the road: Nobody expected him to be in second position tonight and to be able to win two stages. It’s also great to see Taka in fourth and very much in the fight for the podium. We expected the stages to be rough in the afternoon but I think it was rougher than last year: You can clearly see the ruts were deeper and there were more loose rocks. That’s why some drivers had problems, including Seb unfortunately. Tomorrow is another long day so we have to keep focused.”

Sébastien Ogier (Driver car 1)
“This morning I wasn’t super happy with the feeling but we made some adjustments and it started to get better. The afternoon started well with a first stage win but unfortunately that feeling didn’t last long. Even if we would have had another spare tyre, any hopes for a good result were gone. The stages were definitely rougher this afternoon than I expected, and although I tried to avoid every big rock, it was a bit of a lottery with so many sharp stones everywhere. Of course it’s a pity to have to stop early, as we came here to try to have fun and fight at the front. Now we need to use the rest of the weekend as a test as I don’t have many kilometres on gravel with this car. ”

Elfyn Evans (Driver car 33)
“It’s been a really long and tough day, pretty hot in the car and really demanding conditions, especially this afternoon. Everything worked really well immediately in the first stage this morning. We were maybe a bit brave with our tyre choice and struggled a little bit after that, but overall it was a good start. This afternoon it was extremely rough and a bit of a lottery but we managed to get through it and hopefully we’ve seen the worst of the conditions now this weekend. We maybe left a bit of a speed out there but it was a balancing act between surviving and going quickly. It’s good to be in the fight but it’s the result on Sunday that counts and there’s still a long way to go before then.”

Kalle Rovanperä (Driver car 69)
“I have to be really happy with what we did today. To be in second place is not what we expected but we did a really good job today and the team prepared the car to be strong in these tough conditions and that was important because we saw a lot of issues. It was hard to open the road, and even on the second pass we were creating a line for the others and it was really difficult but I think we were quite clever to avoid any problems. Tomorrow there are a lot of kilometres and it will be tough again but we will try to do our best.”

What's next?
Saturday is the longest day of the rally, comprising 164.98 competitive kilometres. It starts with two tests in the Cabreira mountains before Amarante, the longest stage of 2022 so far at 37.24 km. Following mid-day service, all three are repeated before the Porto Foz street stage alongside the mouth of the Douro river. 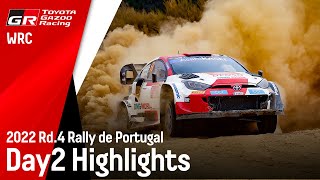