The TOYOTA GAZOO Racing World Rally Team leads Rally Italia Sardegna with Esapekka Lappi at the end of his first full day of gravel competition in the GR YARIS Rally1.

Lappi won two of the day’s stages, claiming the rally lead on both occasions. The first was in the morning’s first pass over Monti di Alà e Buddusò, the longest stage of the rally at 24.7 kilometres. He was on course to go quickest again on the second pass that rounded out the morning loop, only to sustain a punctured tyre close to the end.

He still returned to Alghero for midday service just 3.7 seconds from the lead, and moved back in front with a superb time through the second of the afternoon’s stages, Sedini – Castelsardo. This was the 50th stage win of his WRC career, five years after taking his first in Sardinia with Toyota. It also moved him back into the rally lead by 0.7s, and he may have extended his advantage had the final two stages of the day not been cancelled.

Championship leader Kalle Rovanperä faced a more difficult task opening the road on Sardinia’s loose gravel than he did on the previous round in Portugal. He remained in touch with the leaders for much of the morning, before a wide moment damaged the rear wing on his car, denying him crucial downforce in the final stage before service. The road-cleaning effect was even greater in the two stages that ran in the afternoon and he finished the day eighth overall.

One position and 7.6s ahead of Rovanperä is the TGR WRT Next Generation entry of Takamoto Katsuta, who also had less favourable road conditions due to his third position in the championship.

Elfyn Evans was quickest in the day’s first stage to move into the rally lead, but he had to stop following SS3 after a heavy impact caused damage on the underside of the car. The team was able to repair the damage in service and Evans will restart tomorrow.

Quotes:
Kaj Lindström (Sporting Director)
“It’s very nice to see Esapekka leading tonight. He’s done a good job and I’m impressed with his performance after jumping into the car, just like I was in Sweden. He’s delivering good times and that’s what we want him to do. As for Kalle, this is the first time we’ve seen him struggling with the road sweeping, which is something that we knew happens every year at this rally for whoever is first on the road. But he kept calm, understood the situation and brought the car back, and the key thing for him now for the rest of the weekend is to be thinking beyond Sunday. Taka has also been driving well today, just as we saw in Portugal. That Elfyn was forced to retire after the impact on SS3 was obviously not so nice, but the team have been able to fix the car and he’s good to restart tomorrow.”

Elfyn Evans (Driver car 33)
“The feeling was quite good in the car this morning. The opening stage was difficult with the amount of dust but the time was good. Then, in the second stage, we had quite a bad compression through a dip in the road that caught us by surprise and damaged the underside of the car. We started to get some warnings in the car and tried to manage it as best as we could until the end of the stage. But after that, when we investigated it further, it was quite clear it was too difficult to repair at the side of the road in the time we had. It was disappointing for our day to end so early but we’ll get back out there tomorrow and try to take what we can from the weekend.”

Kalle Rovanperä (Driver car 69)
“Today was difficult as we expected, more so in the afternoon. The stages we did this morning were a bit more sandy so it was not so bad to be the first car in some places. We made a few mistakes and lost a bit of time but otherwise it was OK. In the afternoon there was really a lot of loose gravel so it was very slippery. But we managed to get through it. Tomorrow is a long day without any service and it’s going to be tough conditions, so anything can happen. As fourth car on the road it should be a bit better and we’ll try and gain some positions.”

Esapekka Lappi (Driver car 4)
“I thought we could be close to the front at the end of today but not necessarily to be leading, so it’s been a good day and I’m really satisfied. It’s been three years since I’ve been leading after a Friday and it feels very good. We started at a safe pace, also because of the hanging dust, but then when it was clear we could push like normal. On this rally you can’t drive at 100 per cent all the time but I think we were consistently at 90 per cent and that was the key today. The most important thing was to secure a good road position for tomorrow and now we have the best position possible, so it’s job done for today and let’s continue like this tomorrow.”

What's next?
Saturday follows a similar format to Friday, but with the extra challenge of no midday service. The Tempio Pausania and Erula – Tula stages are run twice in the morning, followed by a tyre fitting zone before two passes of Coiluna – Loelle and Monte Lerno di Pattada. 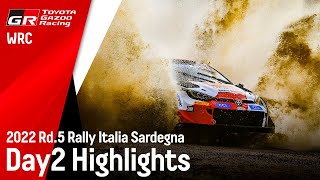