The crews faced two loops of four stages around Otepää to the south of the service park in Tartu, and Rovanperä won seven of these eight stages as he extended his rally lead to 29.1 seconds following the super special that rounded out the day. He demonstrated his speed in all conditions as rain showers once more added to the demands on the fast gravel roads.

Evans began the day with his sixth stage win of the rally and was usually the closest driver to Rovanperä in the stage times, increasing his margin over third position to 42.4s in the process.

Esapekka Lappi was in fourth position overall before a tyre was knocked off its rim on the landing from a jump in the third stage of the morning loop. He was forced to stop and replace it, losing over two minutes and slipping to seventh place.

Takamoto Katsuta continued to build his confidence and performance in his TGR WRT Next Generation entry and gained two positions to end the day in fifth overall.

Quotes:
Jari-Matti Latvala (Team Principal)
“It’s been another strong day and another tricky one with the conditions this afternoon, with heavy ruts and muddy places. These kind of changing conditions just seem to suit Kalle and he’s been really really strong. Elfyn has also been driving very well today: really consistent with no mistakes and with great speed too. So it’s looking very good for us now, but we have to really stay concentrated because the weather is changing all the time and you don’t know what’s coming up and it’s so easy to do a mistake when it’s like this.”

Elfyn Evans (Driver car 33)
“It’s been a good day behind the wheel, even if we’re not ending it where we wanted to be. But Kalle’s been really strong and I had no answer to him today. He’s been a slight step ahead all the time and now he’s built up quite an advantage over us. The positive thing is that we’re a big step ahead of where I was on this rally last year when I really struggled, and it’s great to be in a one-two position for the team. But there’s still a long way to go tomorrow and it’s not easy with the ruts and the conditions out there.”

Kalle Rovanperä (Driver car 69)
“I enjoyed today a lot. To begin with this morning I felt there was not so much grip, but then we changed the setup a bit and we started to have really good times. Every stage we were gaining a bit more time, and pushing hard but not with too much risk. Everything felt in control. Whenever we’ve had tricky low-grip conditions this year it seems that I’m able to drive well and still push quite hard and this has been nice. Tomorrow is a long day still, so we need to keep a good pace with no mistakes.”

Esapekka Lappi (Driver car 4)
“It’s not been the easiest day. It felt good on the second stage this morning and then on the next one we had the tyre come off the rim when we were landing from a jump. We were landing a bit sideways but I think it was bad luck and part of the game. It came very early in the stage so there was no chance to continue without stopping to change it, and we lost a lot of time. After that it was tricky to find the right rhythm for the driving but there were still some good stage times, even though it’s not worth risking a stupid mistake now in this position.”

What's next?
The final day consists of 77.98 competitive kilometres across two loops of three stages, which begin with Tartu Vald, an extended version of the super special. Kanepi and Kambja follow, the latter hosting the rally-ending Power Stage. 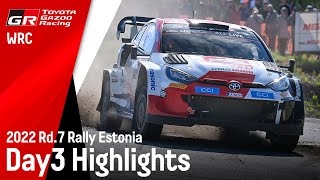