The TOYOTA GAZOO Racing World Rally Team has three drivers in the top four places and in the lead fight on Rally Finland following the first full day of high-speed stages in the forests around Jyväskylä.

There was little to separate the GR YARIS Rally1 HYBRID drivers over some of the season’s fastest roads. Esapekka Lappi, winner of his home rally with the team in 2017, held second place throughout the day and finished it just 3.8 seconds from the leader Ott Tänak. He was quickest on the second stage of the morning, and on each of the final three tests in the evening.

Takamoto Katsuta also enjoyed a strong day in his TGR WRT Next Generation entry, claiming a stage win on the short Harju test in the centre of Jyväskylä and occupying sixth overall, 35.5s from the lead.

Quotes:
Jari-Matti Latvala (Team Principal)
“It’s been a good day. OK, we are not in the lead, but it’s great to see a close fight between the drivers. It’s exciting to follow and it’s good for the sport. Tänak has been very quick today but I’m happy with our drivers and how they’ve performed today, and they’re in good positions to keep fighting for the victory tomorrow. I’m especially happy to see Esapekka’s speed. We could see him gaining more confidence during the day and with this he managed to win three stages in a row and bring the gap back down this evening. Tomorrow we expect rain to come and if it’s heavy, that could affect things.”

Elfyn Evans (Driver car 33)
“I wasn’t feeling so comfortable in the first part of the day. There was a bit more road cleaning than expected and I was a bit hesitant in a few places. But we’ve been changing quite a few small things on the car during the day, playing with things to try and find that last bit of confidence, and the feeling and the times have improved as we’ve gone on. So we’ve made some good progress towards the end of the day, I was feeling a bit better in the car, and that means we can look forward to tomorrow which will be a big day with a lot of kilometres.”

Kalle Rovanperä (Driver car 69)
“I think we have to be quite happy with today. We pushed hard all the time and couldn’t have done more. There was quite a lot of cleaning to do, and even on the second pass, the lines of the smaller cars are always tricky for us to follow. The morning went OK, the driving was quite good. In the afternoon I tried to push harder but it was difficult to close the gap. With the starting place we will have tomorrow it should be a bit easier to fight, and let’s see what the weather brings.”

Esapekka Lappi (Driver car 4)
“It’s been a very good day. The car has felt amazing today, it was handling really well. Everything felt easy and comfortable. In the morning the pace was consistent, we were just missing a few tenths here and there but I was not really on the limit and I knew there was more potential. Later I started to push a bit harder and I was able to step up a bit with the speed. Everything still felt good and under control. It will be a short sleep before tomorrow but we are ready.”

What's next?
Saturday takes the crews south to classic roads around Jämsä for the longest day of the rally with just over 150 competitive kilometres. A loop of four stages is run twice either side of mid-day service and includes two new tests in Rapsula (which uses sections of the legendary Ouninpohja stage) and Vekkula. 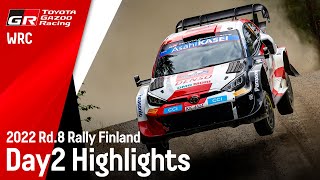