TOYOTA GAZOO Racing World Rally Team driver Esapekka Lappi is third overall and only 8.7 seconds from the lead of Acropolis Rally Greece after a strong performance on the first full day of stages on Friday.

After Thursday night’s opening super special stage in the Olympic Stadium in Athens, crews began the day in Loutraki ahead of six gravel stages on the way back north to the service park in Lamia. With only one of the stages being repeated, road cleaning was a significant factor with those at the front of the running order at a disadvantage sweeping the loose and slippery gravel surface.

Making his first Acropolis appearance for eight years, Lappi gradually climbed the leaderboard during the day, setting some strong times from his seventh position on the road. He won SS4 and then posted second-best times in the next two stages to take second position overall from Sébastien Loeb, who then fought back to take the lead in SS7.

For Elfyn Evans and Kalle Rovanperä – running third and first on the road respectively as per their championship positions – it was a more challenging day with the limited grip available on the stages. Evans ended the day eighth overall, while Rovanperä faced the most challenging conditions of all and is in ninth place tonight.

Making his competitive debut in Greece, Takamoto Katsuta gained confidence and speed during the day in his TGR WRT Next Generation entry and rounds out the overall top 10.

Quotes:
Jari-Matti Latvala (Team Principal)
“It has obviously been a mixed day for our team but we can be very happy with Esapekka’s position tonight and the job that he did today. He didn’t have the best of pre-event tests but this morning he built up the confidence in the first couple of stages and after that he was really in a good zone with the right speed. It shows the performance is in the car and we are right up there to fight for the victory over the remaining two days. For Elfyn and Kalle the conditions were very tough: It’s been the hardest Friday of the year to be opening the road because it’s a lot drier here than it was last year and the cleaning effect has been very big. Hopefully they can have some more confidence tomorrow and have a more positive day.”

Elfyn Evans (Driver car 33)
“It’s been a tough day. We knew it would be difficult running quite high up in the order on probably the loosest stages of the rally today. The cleaning effect was quite clear, but I still think we probably left something out there to be honest. We weren’t always feeling at one with everything. It’s the first time we’ve driven this car with so much loose gravel, so we’re learning as we go. But the stages were all quite different and the surface was changing a lot too, and we made some changes which didn’t work out and probably cost us in the end. There’s a long day to come tomorrow but the road position shouldn’t be quite as punishing and we’ll try our best to move forwards.”

Kalle Rovanperä (Driver car 69)
“Today was maybe even a bit more challenging than I was expecting. It was a tricky day to be opening the road, there was a lot of cleaning for us to do and the grip was very low. We also didn’t have the best feeling with the car. We tried to be clean and avoid any issues, but we couldn’t be on the pace that we needed to be. On some stages we lost too much time compared to the others, but we are here. For tomorrow we will try to find a better feeling and hopefully being third on the road we can have a bit more pace.”

Esapekka Lappi (Driver car 4)
“I’m very happy with today. This morning I was surprised how slippery the stages were. I realised that I needed to adjust my style to follow the clean lines and after that it started to get better and better. OK, the last stage was not great but we are in a good position overall and I’m very satisfied with what we have done. I think we have used our road position advantage well. Tomorrow could be tougher for us, as I don’t have the experience of the longest stage from last year that many of the others have and the starting positions will be more equal. But we will keep our strategy and try to do a similar performance to today.”

What's next?
Saturday consists of two loops of three stages west of Lamia and almost half of the rally’s competitive distance, at 147.98 kilometres. Pyrgos is the longest stage of the weekend at 33.2 km and precedes the returning Perivoli (which last featured in 2005) and the famous Tarzan test. 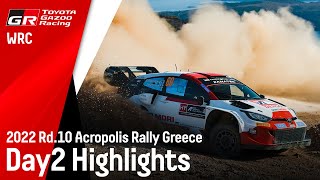