The first action at the all-new Rally Japan began in this morning’s shakedown, held along the same roads that would host the evening’s opening stage – but in the reverse direction. With testing not permitted outside of Europe, this was an important opportunity for the teams and drivers to work on car setup ahead of the weekend’s stages.

After doing four runs over the shakedown, Elfyn Evans set the equal-fastest time in his GR YARIS Rally1 HYBRID, with team-mates Ogier and Kalle Rovanperä in third and sixth respectively.

Following a fantastic reception at the ceremonial start inside the Toyota Stadium – which also hosts the service park for the rally – the drivers took on the 2.75-kilometre Kuragaike Park stage in darkness.

The stage times were close and Ogier together with new co-driver Vincent Landais claimed the stage win by just 0.1 seconds. This year’s world champion Rovanperä was only 0.6s slower in fifth, one place ahead of Evans. Starting his home round of the WRC for the first time, Takamoto Katsuta was one place further back in seventh in his TGR WRT Next Generation entry.

Quotes:
Jari-Matti Latvala (Team Principal)
“It’s fantastic to be here at the start of Rally Japan. We have enjoyed such a nice reception since we arrived, with a lot of eager rally fans all excited for this event. It’s going to be a very challenging event with really narrow stages. Tonight all our drivers performed well with no big time differences. Seb was quite confident already in shakedown and we could see that again in the first stage. It has been a good start today and a nice chance for the drivers to get a bit more confidence ahead of the weekend. With no testing, it’s always good to get a few kilometres under the belt and then it’s easier to go into tomorrow, which begins with probably one of the hardest stages of the rally.”

Sébastien Ogier (Driver car 1)
“Driving in the dark always adds difficulty so this first stage was not the easiest way to start the rally. At least it was short and we drove it in the opposite direction in shakedown so we had an idea of what to expect. So far so good, but the biggest challenge is waiting for us tomorrow. Coming from Spain where the car worked perfectly we are hoping to find a similar feeling this weekend and deliver the result the whole team is hoping for here in Japan. In the recce we discovered extremely twisty and narrow stages and quite unique characteristics, so it will be all about adapting as fast as we can.”

Elfyn Evans (Driver car 33)
“This first stage tonight was quite a challenging start to the event. OK, we had driven it in shakedown but now it was reversed so we couldn’t just follow the same lines. Shakedown was the first chance to drive the car here in Japan so we tried a few different things through the morning and had a good feeling at the end. It’s difficult with long-haul rallies like this as we don’t get a chance to test in representative conditions, so we have to guess the setup a little bit and just try to evolve that during the weekend.”

Kalle Rovanperä (Driver car 69)
“This is going to be a really interesting rally: It’s a very important one for us and also an exciting new one for everybody. It was nice to get into the driving today. The first stage was quite tricky in the dark with some crests and a few difficult places. Both this stage and shakedown were maybe a bit different to the rest of the rally, but without any testing beforehand it was still quite important this morning to try some new setups and things that could help us in the rally. The roads seem to be quite slippery so we might need a different approach to other rallies.”

What's next?
Friday will be the longest day of Rally Japan with 130.22 competitive kilometres to be tackled across two loops of three stages to the north-east of Toyota City. The opening test of the loop, Isegami’s Tunnel, is the rally’s longest at 23.29 km and takes its name from the narrow 308-metre long tunnel that features in the second half of the stage. 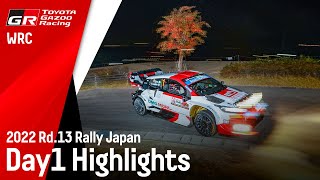