The TOYOTA GAZOO Racing World Rally Team experienced late heartbreak in its goal of closing out the 2022 FIA World Rally Championship season with a victory at home in Japan.

The return of Rally Japan to the WRC calendar for the first time since 2010 was highly challenging for teams, drivers and co-drivers, with an entirely new event held on demanding and twisting asphalt roads in the mountains of the Aichi and Gifu prefectures. The GR YARIS Rally1 HYBRID performed strongly from the beginning, and would win 11 out of 16 stages over the weekend. Unfortunately, a handful of small incidents on the tricky roads proved costly in terms of time and ultimately ended the team’s chances of victory.

Elfyn Evans produced one of his strongest performances of the season to fight for the victory down to the final day, which he began only four seconds from the lead ahead of a long loop of five stages totalling 69.82 kilometres. In the day’s first stage he reduced that gap to just 0.6s with a fourth stage win of the weekend for himself and co-driver Scott Martin. However, in the next test they had to stop and change a wheel and tyre after running wide in a downhill right-hander, dropping them to fourth overall.

This misfortune for Evans did promote Takamoto Katsuta into third position on his home rally in his TGR WRT Next Generation entry. Heavy rain hit for the final two stages of the event but Katsuta safely made it through the treacherous conditions to clinch a special podium finish, his second of the season together with co-driver Aaron Johnston.

Sébastien Ogier showed excellent speed all weekend with his new co-driver Vincent Landais, and may have won had the pair not dropped 2m44s in Friday’s first stage where they had to stop and replace a tyre. Fastest of all through both Saturday and Sunday’s legs, Ogier fought back from last position to finish fourth overall ahead of Evans, only 2m24s from the winner and taking five stage wins along the way.

After a record-breaking season where he became the youngest ever WRC champion, Kalle Rovanperä was also in the fight for victory until Saturday morning when he slid wide in one corner and made contact with a wall, forcing he and co-driver Jonne Halttunen to also stop and change a wheel. After losing significant time, they treated the rest of the rally as a valuable opportunity to test different car setups for the event’s unique characteristics.

Quotes:
Jari-Matti Latvala (Team Principal)
“In the end we did not have the weekend that we wanted to have here at Rally Japan. We can see that we had the speed as Seb was probably the fastest driver through the event and Elfyn was leading for much of the rally. It was just these incidents for each driver which were unfortunately counting against us. The stages here were very demanding and so narrow, so it was easy for these things to happen. At the end of this season we can be very satisfied to have reached our goals by winning all three championships, which is fantastic. Winning the home rally of TOYOTA GAZOO Racing would have been very special, but to have Taka on the podium of his home event feels almost just as good. In rallying, every event is bringing a different challenge and you cannot win every one.”

Sébastien Ogier (Driver car 1)
“It was a challenging end to the rally today with the rain which we knew was coming. It was a tough tyre choice this morning with some stages to be driven in the dry and some in the wet so we had to go with a compromise. I think we had the correct choice overall as we were fastest again over the day. It’s been a good weekend in terms of the performance and speed we showed again this weekend, and the first time with Vincent who has done a perfect job. Of course it would have been even better if we were rewarded with the result that I think we deserved, but some bad luck hit us again this weekend. We are all happy to see Taka on the podium at home and it’s been great to have so much support here in Japan.”

Elfyn Evans (Driver car 33)
“Naturally I’m massively disappointed about today. It’s been a tough season personally and we had a chance here and threw everything at it. Today started really well, we had a good rhythm in the car and things were working well. But on the second stage we ran marginally wide and damaged the tyre. It was a big penalty for a small error but that’s the nature of the game. It’s really busy on the stages here so it was easily done. After that the battle for the win was over and then the rain came and the tyres we had left were not optimal for that. I’m really happy for Taka to be on the podium at his home event: He’s worked hard all year and really deserves it.”

Kalle Rovanperä (Driver car 69)
“This has been a tough rally and a challenging one just as we expected. It didn’t go our way this weekend but sometimes it’s like this. The main thing is we got to the end of the rally and learned some things for the future. Again we were using today as a test day and we wanted to keep the balance with the tyres consistent for the dry stages so that we could try some more things with the setup. I think we made a positive step and found some things which were nice to drive and at least we know the direction for the future. Overall we’ve had a really good season so we can be very happy with that and thanks to the team and everybody who made it possible.” 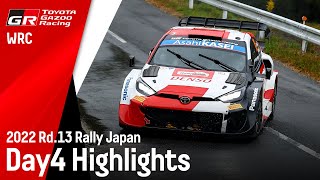