Improvements to the Yaris WRC’s reliability and an attacking tire strategy:
Tänak clinches his second win of the season at the WRC’s first-ever Rally Chile

Last year, Ott Tänak won his first rally for the TOYOTA GAZOO Racing WRT at Rally Argentina; this year, the team lined up for Rally Argentina with high hopes of securing a second victory of the season. Just like 2018, Tänak was once again involved in the battle for victory and even temporarily held the rally lead. Driveshaft issues saw him fall down the standings, but Tänak was able to recover the time he lost through a series of outstanding drives; he returned to a position from which he could fight for the rally win. Immediately after fighting back, however, the Estonian suffered problems with his car’s electrical system. There was a problem with one of the connecting parts of the alternator, which works to charge the battery, and the battery voltage dropped. Tänak was forced to stop his Yaris WRC midway through the Special Stage, and his chances of victory evaporated. 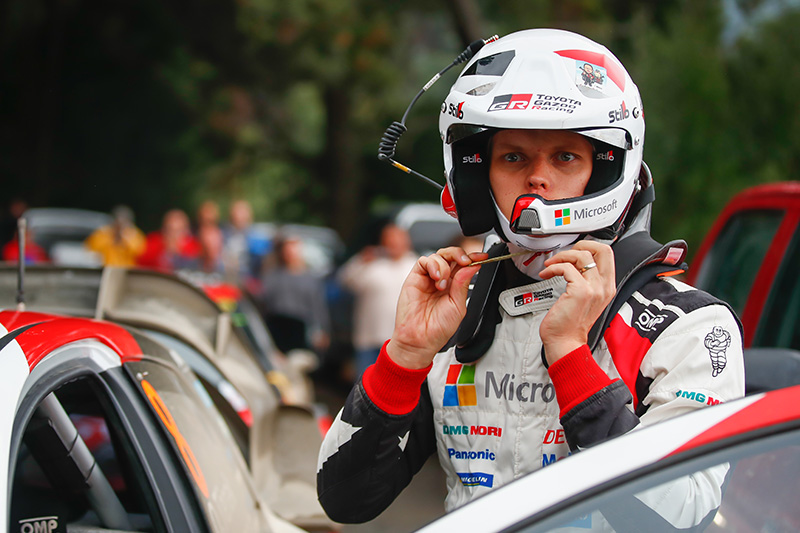 In this way, in Argentina Tänak yet again lost a rally he should have been able to win due to mechanical problems. The engineers and other team staff were full of regret for this state of affairs. There was no doubt the Yaris WRC possessed the necessary speed—it simply lacked the necessary reliability. Of course, the engineers paid the utmost attention when preparing the rally cars to ensure that no problems would occur, and the mechanics took great care when assembling the cars. Despite their best efforts, however, it was the smallest of issues that cost Tänak victory. It was crucial that the team overcame these setbacks, and at the earliest opportunity. Immediately after the conclusion of Rally Argentina, therefore, the team’s engineers started work on resolving the problems. 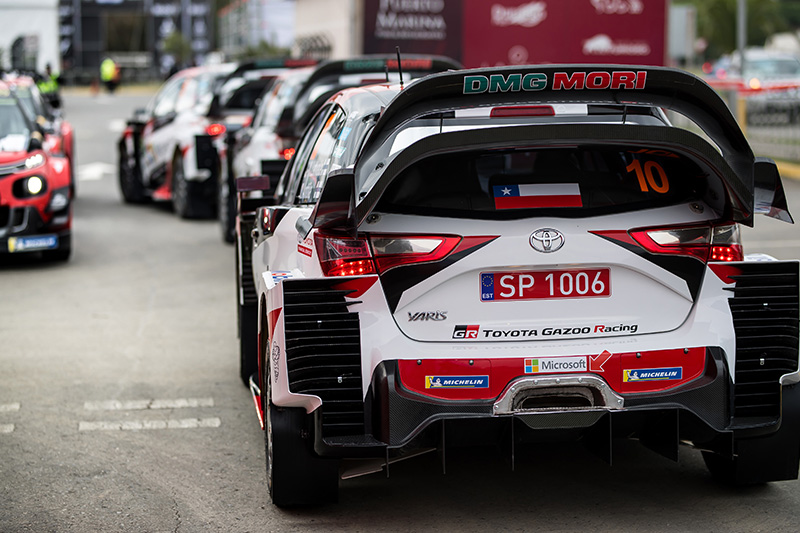 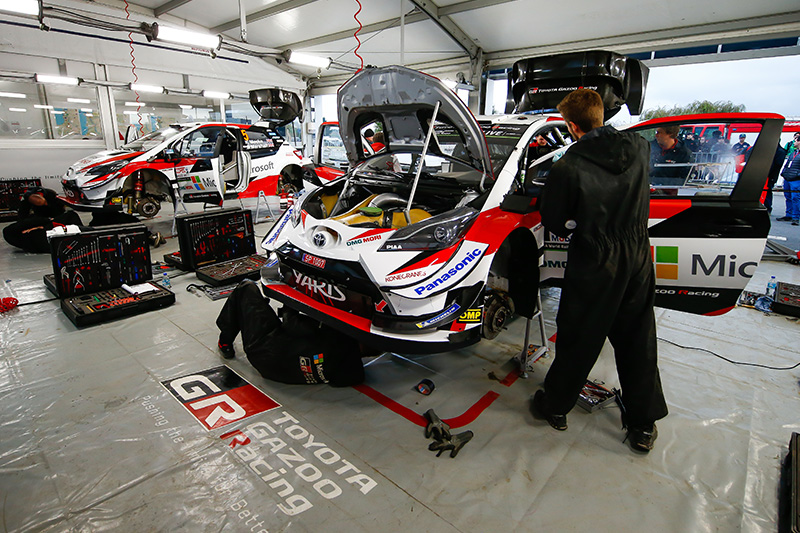 The week after Rally Argentina took place, Japan was still in the middle of a ten-day public holiday. However, Rally Chile—Round Six of the FIA World Rally Championship—would start in several days’ time. If unforeseen troubles occurred again in Chile, it would become almost impossible for the TOYOTA GAZOO Racing WRT and its drivers to fight back in the Manufacturers’ and Drivers’ Championships. For this reason, Kondo wanted to increase the reliability of the car as much as he could in a single week. Toyota engineers could sense Kondo’s passion and sense of crisis, and they were only too happy to help. Far away from South America in Japan, the engineers drew up a list of potential issues with the electrical system; they then assigned an order of priority to each of these potential issues, and proposed that the team carry out reviews and checks. It would have been almost impossible to install new parts both due to the amount of time available and due to the WRC regulations; despite this, there were still numerous improvements that could be made, and one of these was to change the tightening torque values used when installing electrical system parts. 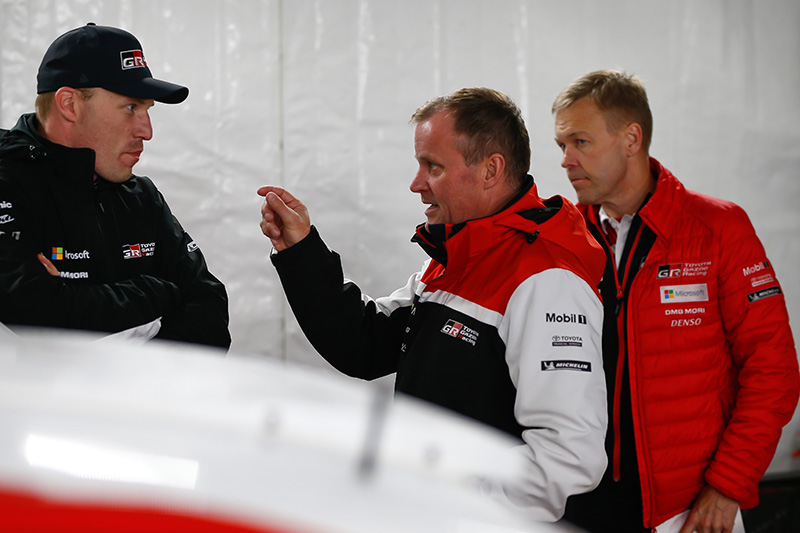 Applying experience and success in production vehicles to rally cars

For example, when attaching the wheels to the cars, there is a predetermined torque value used to tighten the wheel nuts. A tool known as a torque wrench enables the torque value to be set, and makes a clicking noise when the value is reached. The important thing is setting the correct torque value—but differences in opinion can arise here. The same goes with tightening torque values for electrical system parts. The TOYOTA GAZOO Racing WRT, which specializes in motorsports, first calculates theoretical values, then checks whether or not these values are appropriate through a series of tests. When developing production vehicles, there are theoretical values as well. However, production vehicles are produced in huge numbers over many years, they are driven in various conditions around the world, and used in a wide range of scenarios—in this way, the actual experiences and results of the vehicles supplement the theoretical values. In order to ensure that parts will not fall off or come loose, it might be thought that using higher torque values is the answer; however, if certain parts are overtightened, they are liable to destroy the balance of the whole—and there is the possibility that this will impact negatively in other areas. Production car development engineers fully understand such subtleties, and so the TOYOTA GAZOO Racing WRT decided to revise the tightening torque values of the electrical system parts using their feedback. 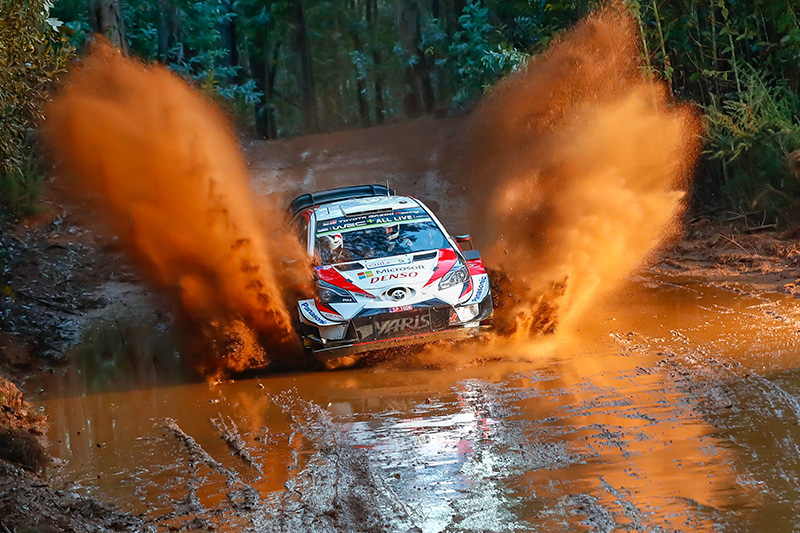 Revising the tightening torque values is just one example of the proposals made by Toyota’s engineers. The TOYOTA GAZOO Racing WRT in fact immediately incorporated several of the suggestions for improvement they made. The result of these improvements was that the Yaris WRC suffered no reliability issues at Rally Chile, and the drivers were able to demonstrate their full potential. Rally Chile was part of the WRC calendar for the first time this year, and the Yaris WRC proved to be both fast and dependable. 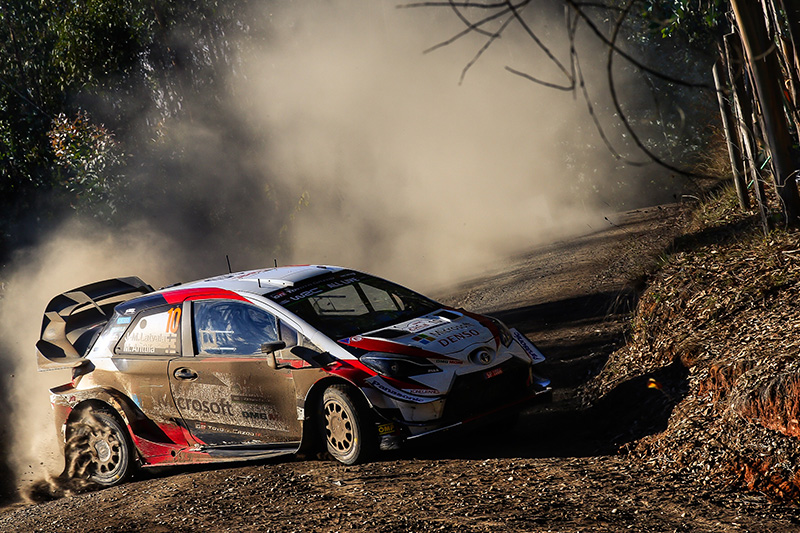 However, the help of the production vehicle development engineers on improving the Yaris WRC has only just begun. In June, they will go to Finland and commence full-scale improvement activities together with the TOYOTA GAZOO Racing WRT. The WRC grows more competitive by the day, and the burden undertaken by the rally cars likewise increases. In addition, even at the same rally, the road conditions change every year—it is therefore impossible to say with confidence that because everything went well last year, everything will go well this year. This is one of the difficulties of a motorsport that is heavily influenced by the natural environment. In order to ensure it meets no troubles, the team has to preemptively prevent unexpected situations from occurring. 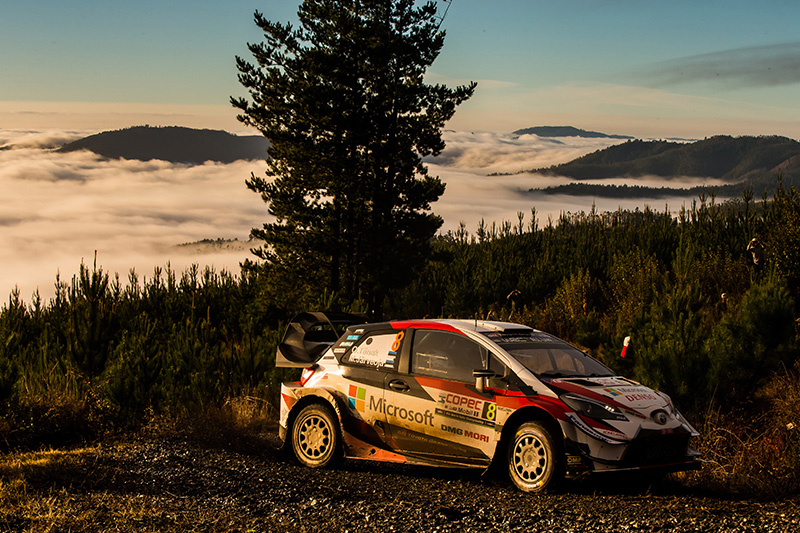 The Yaris WRC, which had added superb reliability to its innate speed, fully demonstrated its strengths on Chile’s unpaved roads. Jari-Matti Latvala and Kris Meeke shared the best time on the opening Special Stage, while Tänak went fastest on SS2 to claim top spot in the rally standings—a position he maintained until the end of the rally. Indeed, Tänak was fastest in six of Rally Chile’s 16 Special Stages. The Estonian had opened up a gap of 23.1 seconds over second place by the end of the rally, ensuring he would claim his first victory since Rally Sweden in Round Two. Tänak also claimed five bonus Drivers’ Championship points by winning the final Power Stage. As a result, he rose to second in the overall standings, and now sits just 10 points behind the leader, Sébastien Ogier. Tänak is very much back in the fight for the championship. 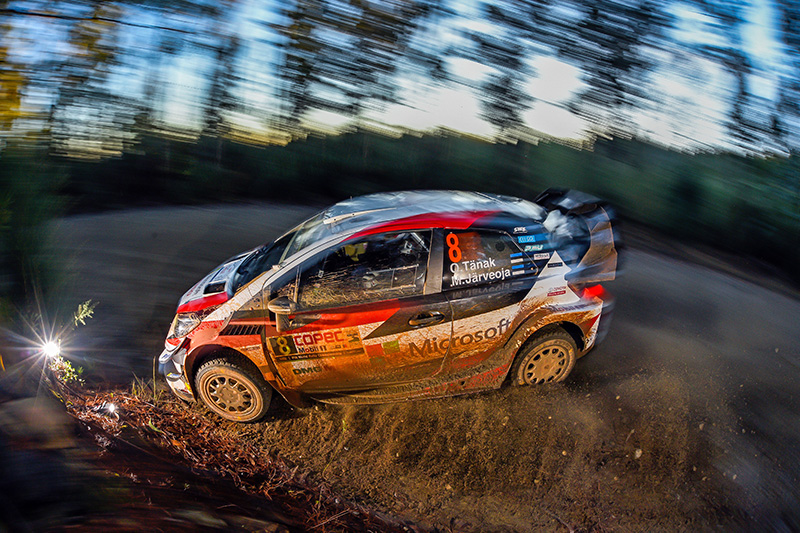 Tänak managed to preserve a healthy lead through to the end of the rally, but it was by no means a simple victory. His rivals—including Ogier, who finished in second place—were extremely fast. If Tänak had relaxed at any point, his lead would no doubt have been cut immediately. The battle was fierce. For this reason, even though Tänak had established a 22.4-second lead over Ogier in second place by the end of Day One, he sought to extend this lead on Day Two; to this end, he opted to use a different tire strategy to his rivals in the morning session. While other drivers chose to carry just a single spare tire, Tänak took two. This increased the weight of his vehicle by more than 25 kilograms—this was a significant handicap, but Tänak and his engineer were convinced that the extra tire would bring an even greater benefit. 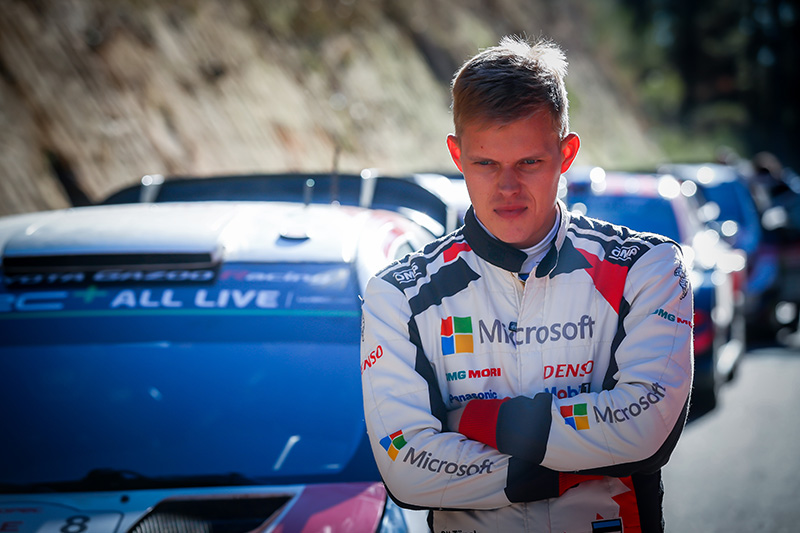 While Chile’s gravel roads were on the whole smooth, tire wear was unexpectedly severe. If drivers attacked for too long on the reasonably soft medium tires, the tire tread became significantly worn. During the morning stages, a combination of overnight dew and morning mists meant that the surfaces were damp in many places. Since temperatures were low as well, the majority of teams and drivers expected tire wear to be comparatively mild. For this reason, all the works drivers apart from Tänak started the stages with five medium tires, including one carried as a spare. Tänak, on the other hand, took two spare tires, meaning he started the stages with six medium tires altogether. This strategy proved to be a success. On SS9, the final stage of the morning, the wear on his rivals’ tire had become quite significant—but Tänak was able to record the fastest time, and increased the gap to Ogier in second place to 34.6 seconds. After he had completed the three morning Special Stages and returned to the service park, all six of Tänak’s tires—including the two he had carried as spares—were cleanly worn. He had fully taken advantage of carrying one more tire than his rivals. 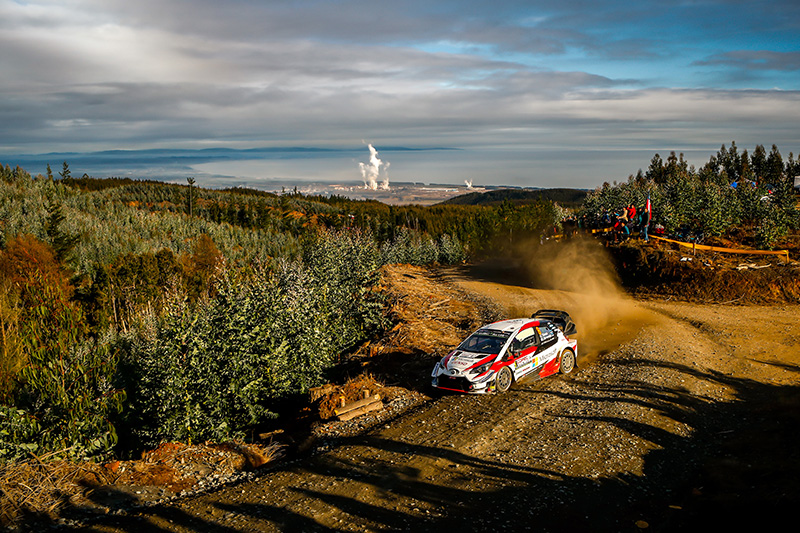 Yet the challenges faced by Tänak and his team did not stop there. During the afternoon stages, when the temperatures had risen and the roads had started to dry out, the surface conditions were ideally suited to hard tires. Apart from Ogier, who selected three hard and two medium tires, most of the drivers opted to take five hard tires. Tänak, too, had originally planned to take five hard tires; however, just before leaving the service park, he decided to change one of his hard tires for a medium. Some sections of the afternoon stages were still wet, and he expected the medium tires to be more effective. Tänak was once again proved correct, and he went on to record the fastest time on SS11 as well. 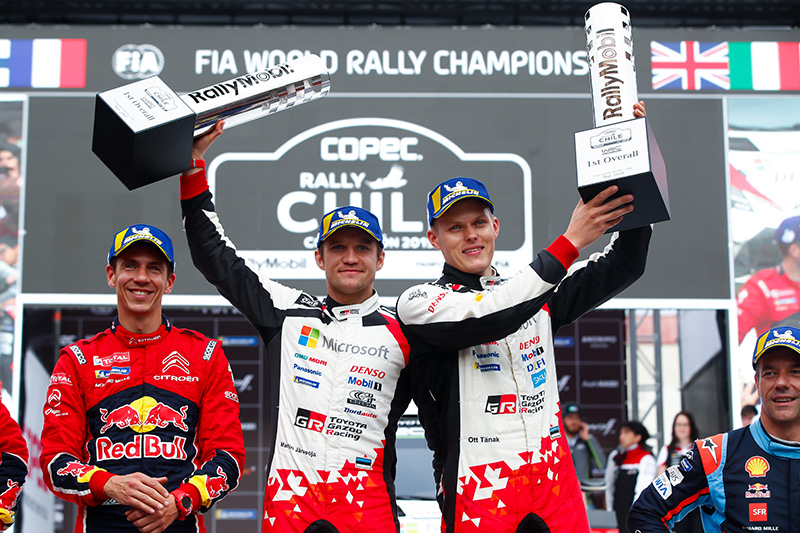 Day Two was the most important part of Rally Chile: Tänak’s tire strategies twice proved successful, and he was able to cement his lead at the top of the standings. Even though he had established a healthy gap over second place, Tänak chose not to defend but continued to attack. This was a clear demonstration of both Tänak’s and the team’s challenging spirit with regard to the competition. Latvala, meanwhile, was engaged in a fierce battle for second with Ogier until midway through the rally, and Meeke, despite losing his front windscreen after rolling his car, went fourth fastest on the following Special Stage—both drivers continued to attack doggedly to the end. Their efforts were, unfortunately, not reflected in the final standings; however, if one or two more pieces of the jigsaw puzzle fall into place, they will without doubt find themselves standing on the podium. 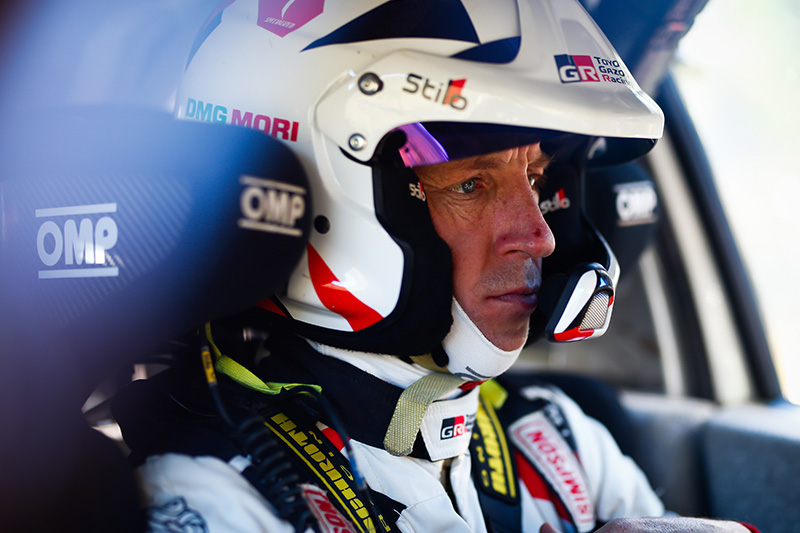 With the two South American gravel rallies finished, the WRC now moves to Europe. Round Seven, Rally de Portugal, Round Eight, Rally Italia Sardegna, and Round Nine, Rally Finland, are all gravel rallies, but present very different challenges. Looking at the championship as a whole, these three successive rallies may well be regarded as critical. In order to maintain the positive flow they established at Rally Chile, and in order to return to the top of the Drivers’ Championship, the drivers and the team will work even harder as they prepare for the middle phase of the season. 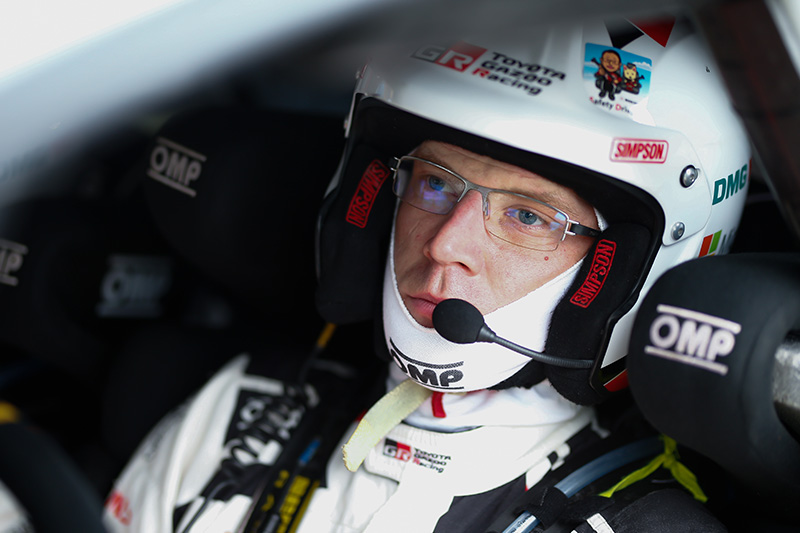