― Decided at the final round of the "TGR GT Cup,"
a global online race concluding the 2021 "e-Motorsports" season ―

On Friday December 3rd, the finals of the TGR GT Cup, a one-make race using the PlayStation®4＊1 (PS4® below) software Gran Turismo Sport＊2 was held, and 24 representatives from around the world gathered at the online circuit. Tomoaki Yamanaka (Japan) was awarded the championship and became the world’s fastest eTGR driver of 2021.

With the spread of COVID-19 still not brought under control, e-Motorsports attracted global attention as it was held as an event at the Olympic Virtual Series before the Tokyo Olympics. Now in its third year, the TGR GT Cup was held as a new series, complete with a line-up of GR models and a format of changing the cars used in each round of qualifying, something that is unique to e-Motorsports. The total number of participants in the online rounds of qualifying increased substantially from about 27,000 competitors last year to about 66,000 competitors this year. Also, in response to the strong demand from Southeast Asia, the Middle East and other regions, a regional selection slot was newly established, with the winner of the regional finals advancing to the TGR GT Cup finals, playing a role in globalizing the competition.

The finals of the TGR GT Cup, held on Friday December 3rd, were held as part of the FIA Gran Turismo Championships World Finals, a global online race connecting 14 countries around the world. Competitors from all over the world were connected, with studios in London and Tokyo serving as hubs, and their outstanding driving skills led to unpredictable races that were very exciting to watch. The final race, held with 16 cars at the Circuit de la Sarthe⁠—the circuit that hosts the 24 Hours of Le Mans⁠—Tomoaki Yamanaka (Japan), who has won world championships as a member of Team Toyota since the inception of the FIA Gran Turismo Championships, won the final and took the title of the fastest eTGR driver in the world of 2021. Second place went to Takuma Miyazono (Japan), last year’s winner, and third place went to newcomer Rikuto Kobayashi (Japan).
At the FIA GT Championships held the following day, in the Manufacturer Series, which determines the world’s strongest automobile manufacturer, Coque López (Spain), Tomoaki Yamanaka (Japan) and Igor Fraga (Brazil) competed for Team Toyota and won all three races, achieving a complete victory.

TGR GT Cup Race Developments:
The finals were held in two rounds, with a Semi-Final and a Final Race. The course for the Semi-Final was the Red Bull Ring, the venue of the F1 Austrian Grand Prix. In heavy rain, drivers carefully drove the GR Yaris. Semi-Final Group A and Semi-Final Group B each consisted of 12 drivers, and the top eight finishers in each group, for a total of 16, advanced to the final race at the famous Circuit de la Sarthe, home of the 24 Hours of Le Mans. Valerio Gallo (Italy) took 1st place in Group A and Rikuto Kobayashi (Japan) took 1st place in Group B.
In the Final Race, pole position was decided by rankings from the Semi-Finals and was claimed by Japan’s Rikuto Kobayashi, while Valerio Gallo of Italy took 2nd place in the front row. In the second row, Spain’s Jose Serrano and Brazil’s Lucas Bonelli took 3rd and 4th places respectively, while Japan’s Takuma Miyazono and Tomoaki Yamanaka followed in 5th and 6th places. The Final Race format was a six-lap sprint race around the Circuit de la Sarthe, and the car used was the new GR86 that went on sale just this fall. Refueling and tire changes were optional, but it was mandatory to take one pit stop during the race.
From the first lap after the start of the race, the 16 GR86s drove single-file through two chicanes down Le Man’s famous 6 km straight, the Hunaudières, using each other’s slipstreams to reach speeds of 240 km/h before battling to overtake each other at Mulsanne’s Corner. 10th place Coque López pitted at the end of the first lap to fulfil the pit stop requirement early on. By the end of the 2nd lap, the top eight had gained a five-second lead over the following cars, and almost all cars had pitted except for the leading four of Kobayashi, Gallo, Serrano and Bonelli. In the 3rd lap, the intense battle between Kobayashi and Gallo continued, with Kobayashi pitting at the end of the lap while Gallo and Serrano continued racing.
Miyazono, in 6th place following the mandatory pit stop, began to close the gap with the lead group. Miyazono was 11.5 seconds behind Bonelli at the beginning of the 4th lap, but as the top four drivers pitted, the order changed dramatically. Kobayashi was able to return to the course in 6th place behind Miyazono and Yamanaka, but Bonelli lost his position during the pit stop and returned to the course in 9th place. With only two laps remaining, Gallo and Serrano had a 11-second lead on the three drivers from Japan but fell to 6th and 7th place respectively after pitting, yielding the lead to the Japanese. In the final lap, as the drivers from Japan took turns battling for the lead, 2nd place Yamanaka took on Miyazono on the Mulsanne Straight. However, Miyazono made up for this loss and, with the same Miyazono-Yamanaka positioning, the two entered the second half of the circuit. Then, with 3.8 km left to go until the finish line, Yamanaka risked it all at the Indianapolis corner and successfully overtook Miyazono. The two cars drove in close succession and received the checkered flag. Miyazono, hoping to defend his championship, was edged out by Yamanaka by 0.4 seconds and narrowly missed out on victory. 3rd place was claimed by newcomer Rikuto Kobayashi, giving the Japanese team a 1-2-3 finish at the 2021 TGR GT Cup.

Having been held as an event at the Olympic Virtual Series, 2021 was a year where e-Motorsports became a new category of sports that was recognized by more people. There were also competitions such as the TOYOTA ATHLETE CUP, in which Olympic athletes competed, and the GT Young Challenge for university automobile clubs.
In 2022, TGR will continue as an official partner of the FIA GT Championships and will also hold the TGR GT Cup for e-Motorsports players around the world to enjoy. Further information will be announced around the end of March. It is our hope that more people will continue to participate next year and beyond, to continue to raise its popularity together with all of us.
As a part of these efforts, as of the end of November, 550,000 units of the new GR 86 were downloaded and purchased in the game since its inclusion in Gran Turismo Sport on Thursday, July 8.

Tomoaki Yamanaka (Japan) comment:
The name changed to the TGR GT Cup this year, so I’m thrilled to be the first champion of this new championship! I have been competing since the days of the GR Supra GT Cup, but have been frustrated by my lack of results over the past two years. Looking back at the Grand Final race, the timing of pit stops was a key factor. After pitting out, I could use the slipstream from Miyazono in front of me to save my tires, and his insane pace got me up to 2nd place in the final lap. The Circuit de la Sarthe is a tough place to try to overtake someone, but I was able to make good use of the tires that I saved and overtake from the outside on the Indianapolis corner to take the checkered flag. I didn’t give up on winning until the end and I was able to build up toward the final lap which is what led to victory. I was honestly really relieved when I won. Obviously, I was happy as well, but the most important reason was that this result is proof that I have what it takes to compete on the world stage. I will never forget the joy from this victory and will keep competing at a world level going forward. I’m also thrilled to have won my second World Championship in the Manufacturer Series. Thanks to my amazing teammates and a great car, we were able to get this great result. We vowed to take back the championship and felt intense pressure in this tournament, but the three of us gave it more than 100% and were rewarded with this result. Even in the challenging conditions of 2021, I’m thrilled that I can take on this challenge every year thanks to the people who support us and the organizers of the tournament. I will keep working hard as a player to make e-Motorsports even more exciting. Thank you very much for your support this year. 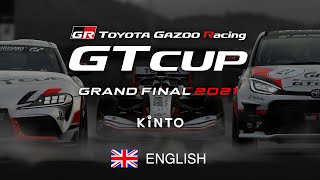