Katsuta is contesting a full season in the new-generation Rally1 car together with co-driver Aaron Johnston and this year scores points for a new team, TOYOTA GAZOO Racing World Rally Team Next Generation.

The legendary Rallye Monte-Carlo is famed for its changeable conditions, although the stages this year generally featured less snow and ice than usual. Still, the roads of the French Alps were a tricky place for the drivers to get to grips with the additional power provided by the hybrid unit plus the many other changes required by the new technical regulations.

Katsuta made an understandably cautious start in Thursday night’s opening stages in darkness but quickly improved his pace during the first full day of action on Friday, when he set top-five stage times in three of the six tests. During Saturday he climbed to fifth overall, but in the day’s final stage in the most challenging conditions of the rally he slid wide and into a ditch, requiring assistance from spectators to get him back on the road. This dropped him to 13th place overall but on Sunday Katsuta showed no loss of confidence and went third-fastest on both SS15 and SS16 as he made his way back up to eighth overall.

Quotes:
Takamoto Katsuta:“I have very mixed feelings at the end of the rally. We had a good weekend until my mistake on the final stage of Saturday. Of course that was a huge disappointment, it was just a small mistake under braking but it can destroy a rally like this one. Apart from this I’m pretty happy. I learned a lot about the car and started to understand how best to drive it and how to use the extra power from the hybrid. This year Rallye Monte-Carlo was drier than usual but the conditions were still very tricky with frosty and damp sections. But the car was behaving very well and we improved the setup a lot, as well as my driving. After what happened on Saturday, we still set some good times on Sunday and I had room to push more in some areas, so it was good learning.”

Juho Hänninen (TOYOTA GAZOO Racing WRC Challenge Program instructor):“Of course it was huge disappointment for Takamoto on Saturday when he got stuck in the final stage of the day, because he had been in a good position overall. With that he saw how a minor error can be crucial on this rally. But in the end I am really happy with the pace that he showed during the weekend and how much he learned about the new car. He was able to complete all the stages and that’s really important at this early stage.”

Rally Sweden (February 24-27) is the only full winter event of the season taking place on snow and ice. This year the event moves further north to a new base in Umeå meaning all of the stages will be new to the drivers. Metal studs inserted into the tyres bite into the ice to provide grip and allow for some of the highest speeds of the year. 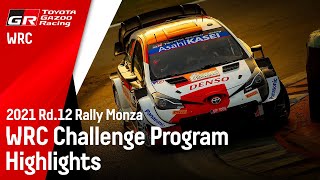