The famous Monza racing circuit near Milan was hosting the final round of the WRC for the second year in a row; in 2020 it was the scene of Katsuta’s maiden stage win in the rally-ending Power Stage. This year’s rally combined an increased number of stages on demanding mountain roads with tests at the circuit itself, which provided some familiarity for ex-Formula 3 racer Katsuta but also included sections on gravel.

Guided by co-driver Aaron Johnston, Katsuta made a cautious start in Friday morning’s opening loop of mountain stages where thick fog and damp roads added to the challenge. However, he showed strong pace during the afternoon at Monza, posting a pair of fifth-fastest times and moving into sixth overall before going second quickest in the day’s final stage. On Saturday morning he then showed increased confidence and speed in the mountains – going fourth-fastest in SS9.

Returning to the circuit for the rest of the rally, he continued to set competitive times into the final day on Sunday. In the penultimate stage he collided at high speed with a concrete block in a chicane, losing a position overall. But after a great job by the team to fix the car during a 15-minute service, Katsuta returned to the track and went second-quickest again in the Power Stage.

Quotes:
Takamoto Katsuta:“In this rally I tried to build my confidence. I had a pretty good feeling from the start on the circuit stages. In the mountains I needed to improve a lot, but I could see where I was losing time. On the second day I had a better feeling and I was able to push more. Near the end on Sunday I made a very small but stupid mistake and I lost a position. A huge thanks to the team for fixing the car so that I could drive the last stage. I was second in the Power Stage, so still there are some positives to take from this weekend. Thank you to everyone who supported me this season.”

Juho Hänninen (TOYOTA GAZOO Racing WRC Challenge Program instructor):“The target for Monza was to finish the season with a solid run after some difficult rallies for Taka. On Friday the conditions were tricky with a lot of grip changes and he didn’t feel so confident. But straightaway on Saturday he was more confident with the car and his driving and the times were much better. On Sunday he was still trying to catch another position when he hit the concrete block. I’m so happy he could get back to service and the guys did an amazing job to fix the car, because being able to finish the rally was much better than having to retire on the stage – especially as he then did really good in the Power Stage. The car was not even close to how it was before, so for him to set that time on the same stage where he made the mistake, I was really happy. In the end it was a good finish to the season and now we can start to focus on next season and Rallye Monte-Carlo.” 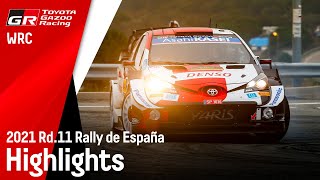