TOYOTA GAZOO Racing WRC Challenge Program driver Takamoto Katsuta was hampered by an early error on the Rally de España, but put the incident behind him to gain more valuable experience in the Toyota Yaris WRC.

This year, the rally based in Salou on the Costa Daurada returned to being an all-asphalt event for the first time since 2009 – rather than the mixed-surface event that Katsuta contested as just his second event in the Yaris WRC two years ago.

Unfortunately, Katsuta’s rally got off to a tough start when he damaged the front-left corner of his car against a barrier in Friday’s opening stage after misunderstanding a pacenote. While he was able to complete the stage, the damage meant that Katsuta and co-driver Aaron Johnston were forced to retire from the opening leg of the rally.

The team was able to repair the damage so that Katsuta could return on Saturday morning under restart rules. While he lacked confidence initially, he went on to set some good stage times over the rally’s 11 remaining stages – including two times inside the top five – while gaining further experience alongside Johnston.

Quotes:
Takamoto Katsuta:“Unfortunately, this rally didn’t start how I expected. It was my mistake. I misunderstood the information in my pacenotes and it was a much tighter corner than I thought it would be. We were carrying too much speed and I couldn’t avoid the barrier. But thanks to the team who fixed the car, we were able to restart. On Saturday mornings I was struggling a lot with my confidence, but already at the end of the day I had a better feeling and some good stage times, and at the end of the rally the feeling was pretty good. Now I am looking forward to the final round of the season in Monza.”

Juho Hänninen (TOYOTA GAZOO Racing WRC Challenge Program instructor):“It was really unfortunate what happened on Friday because it was nothing to do with Taka pushing too much or taking risks. He was being careful and just gaining the feeling on that first stage. The pacenote was correct but he drove an easier corner than it actually was. It’s not easy to restart a rally after that, especially when the pace was high at the front, and he needed some time for him to build the confidence. But already in the third stage the times were good, and they improved pretty quickly considering how big the disappointment was on Friday. It’s nice that he was able to drive two whole days of the rally, and that’s good looking ahead to Monza.”

Italy’s famous Monza racing circuit will host the final round for the second year in a row on November 19-21. As well as stages around the track itself, this year’s event features a greater number of tests on mountainous asphalt roads near Bergamo. 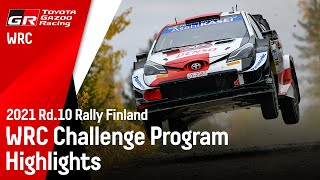