Having been based in the rally’s home city of Jyväskylä for many years, Katsuta considers Rally Finland as a home event – but the cancellation of the 2020 edition meant this was the first time he was competing on the high-speed forest roads in the top category of World Rally Cars. Adding to the challenge was the later-than-usual autumn date, with cooler temperatures and increased moisture reducing the grip available on the stages. Having had to miss the previous round in Greece after co-driver Keaton Williams became unavailable for family reasons, Katsuta was starting Rally Finland with a new navigator in Aaron Johnston.

The new partnership got off to the best possible start when Katsuta recorded the fastest time Friday’s opening Harju stage that used public streets within Jyväskylä. Their lead was unfortunately short-lived after a high-speed spin in the next stage, with Katsuta ending the day in eighth overall. On Saturday morning’s second stage he had to retire after running wide and damaging the rear-right corner of his car. Katsuta returned on Sunday under restart rules and set strong stage times – including fourth in the rally-ending Power Stage – despite facing the most slippery conditions running first on the road.

Quotes:
Takamoto Katsuta:“We started the rally very well with a stage win. It was only a short stage but it was still nice to be fastest. Then I had a big moment in the first forest stage, and after this I was struggling to get back the confidence and feeling. On Saturday I tried to push a bit more, but it was more difficult with our road position starting near the front. In SS8 the split times were good but unfortunately before the finish there was a high-speed corner which was more slippery than I expected so went a bit wide, hit a rock and had to stop. Thank you to the team for fixing the car so we could restart on Sunday. We were the first car on the road but the times were pretty OK. Overall it was a disappointing weekend, but this is motorsport and I will try to learn for the future.”

Juho Hänninen (TOYOTA GAZOO Racing WRC Challenge Program instructor):“Takamoto of course had high hopes for this rally, but it was not the best situation to start with a new co-driver, and with not so much seat time in recent rallies he was maybe missing the feeling a little bit. After the spin on Friday he started to build up the confidence and the times were quite good considering everything. On Saturday he started to be faster and the splits on the Päijälä stage were promising, but unfortunately he went wide off a jump and hit a big rock so had to retire. What was nice that he was really keen to restart on Sunday and just get more driving and more kilometres with Aaron. The final day was good, and most importantly he worked well with Aaron in the car.”

Rally de España will be the penultimate round of the season on October 14-17. Based in Salou to the south of Barcelona, the event is returning to the calendar after a year away and will be held on fast and smooth asphalt roads – similar to a racing circuit in their characteristics – after several years as a mixed-surface challenge. 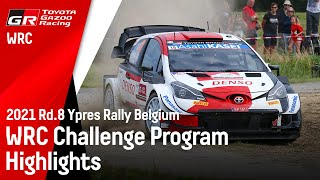