Rally Sweden is the only pure winter round of the FIA World Rally Championship season, and this year was held in a new region further north around the city of Umeå, meaning drivers faced unfamiliar stages and had to prepare all-new pacenotes.

Katsuta was still getting to grips with the new-for-2022 hybrid Rally1 car at the beginning of the rally, and lost time on the fourth stage when he ran wide into a snowbank. Nonetheless, he ended Friday in sixth place overall and then made a clear step forward from Saturday morning with consistent stage times that were not far from those of the leading drivers.

The reward for Katsuta and co-driver Aaron Johnston at the finish was fourth overall, as well as the fourth-fastest time in the rally-ending Power Stage. It is Katsuta’s best result since his second-place at last year’s Safari Rally, and ensured a strong points haul for himself and TOYOTA GAZOO Racing World Rally Team Next Generation.

Quotes:
Takamoto Katsuta:“To finish the rally in fourth place is very good. In the beginning of the weekend I was struggling a lot, but by the end I was very comfortable in the car and I was enjoying it a lot on the stages. Thank you so much to the team, because they changed a lot of things during each service and the feeling in the car was perfect at the end of the weekend. From Saturday onwards especially, I felt so comfortable in the car. In the Power Stage I tried a big push to get some extra points for the team and took two points, which was good even though there was room to improve. But the most important thing is that we finished the rally. Thanks to Aaron as well: He did a really good job during the weekend.”

Juho Hänninen (TOYOTA GAZOO Racing WRC Challenge Program instructor):“I think it was a pretty positive rally for Taka. He made a small mistake on Friday but in the end it didn’t really have an impact on his overall position. On Saturday morning after a small setup change on the car he was straight away much more confident. Through Saturday and Sunday he was really consistent with good stage times, and he completed the weekend with a good drive and a good time in the Power Stage. I’m really happy with that. After Monte Carlo, I’m sure that this strong result in the new car will be good for Taka’s confidence moving on to Croatia.”

Round three of the 2022 season is the Croatia Rally on April 21-24, taking place on varied asphalt roads around the capital city Zagreb. 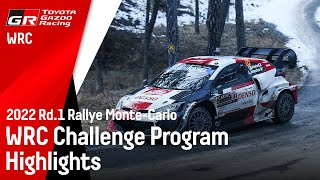