Staged on asphalt roads around the capital city Zagreb, the Croatia Rally was held as an FIA World Rally Championship round for the first time in 2021 when Katsuta impressed with two stage wins. This time, however, the challenge was far greater for the drivers thanks to the weather conditions, with heavy rain and fog dominating the opening day on Friday in particular. This made the roads – already known for their frequent surface and grip changes – extra slippery with lots of mud and debris, and the risk of punctures was high.

Katsuta adopted a cautious approach but was already able to improve his confidence on Friday afternoon when he set the joint fourth-fastest time in SS7. His and co-driver Aaron Johnston’s overall time was impacted by tyre damage in both SS8 and on Saturday’s SS13, but by avoiding mistakes they continued to climb the leaderboard up to sixth place by the finish.

Quotes:
Takamoto Katsuta:“Honestly it has been a difficult weekend with really changeable weather and conditions. I’ve not really driven on this kind of wet and muddy asphalt rally before, so it was good experience for me and I just tried to learn as much as possible. The biggest thing is that we finished the rally. I was able to be patient and accept the situation, which is good. Maybe before I would try to push too much, make a mistake and leave with a worse feeling. But I was disappointed with my lack of speed, so I need to work out what I have to improve to be better next time if we have this kind of rally again. It was a bit frustrating but hopefully the experience will help me for the future. The next rally in Portugal is totally different. I feel quite confident in this car on gravel and enjoy that rally so I hope that it can be a better one for me.”

Juho Hänninen (TOYOTA GAZOO Racing WRC Challenge Program instructor):“The conditions on this rally were extremely difficult for all of the drivers. Driving the stages as part of Taka’s gravel crew, we saw just how much dirt was on the road and in the cuts on the inside of the corners. To have conditions like this on an asphalt rally was really a new experience for Taka and it was not easy for him to have the confidence. But it was good to see that he could finish the rally and didn’t try to push too hard when the confidence was not there. This allowed him to gain experience – which could be useful if we get similar conditions for the Ypres Rally – and now he can look forward to Portugal, which was a really strong rally for him last year.”

Rally de Portugal (May 19-22) is the first gravel event of the season: Based in Matosinhos near Porto in the north of the country, it features classic stages on sandy and rocky roads. 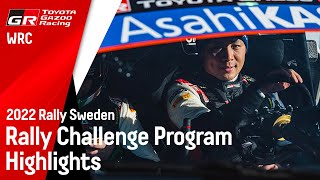