Characterised by fast and technical roads with a sandy surface, Portugal was the opening gravel event of the 2021 season. As a result, there was another new package of Pirelli tyres for the drivers to get to grips with, and tyre choice and management proved to be an important part of the weekend. Katsuta, co-driven by Dan Barritt, was contesting the event in the Yaris WRC for the first time, and looking to build upon a hat-trick of sixth-place finishes in the opening rounds of the season.

Katsuta was competitive from the beginning of the rally, setting three top-four stage times on the opening day and moving up to fourth place overall – having been at one stage the highest-placed of the Toyota Yaris WRC drivers. During Saturday he continued to set great times and swapped places on several occasions with his team-mate, the seven-time world champion Sébastien Ogier.
He ended the day just 1.5 seconds behind in fourth. On Sunday he focused on reaching the finish and drove safely through the final five stages, maintaining his position to secure a fantastic result.

Quotes:
Takamoto Katsuta:
“For sure, I’m pretty happy about this weekend. It has been a tough rally and every stage has been quite tricky. I had one big moment on Saturday night but we could survive this without problems and the team did a great job as always to repair the car. It has not been an easy weekend and the last day especially was quite tough for me, but I could finish with the best result of my career and I’m very happy to fight with the top drivers like we did. I have definitely made a step forward compared to before. But, like I’m always saying, I still need to improve a lot, so I will continue to work hard to keep going in the right direction.”

Juho Hänninen (TOYOTA GAZOO Racing WRC Challenge Program instructor):“This was a really impressive rally from Taka and I’m really happy for him. It’s great to see how quickly he has been making progress this year. On the previous events we’ve seen really good results and consistent stage times, but he took it one step further here. The speed was really consistent across every stage without mistakes, and it was so nice to follow on Saturday when he was basically fighting all day with Sébastien. He was really relaxed and enjoying the driving and didn’t need to play with the car setup, so he was just focused on the driving. At the same time the results from earlier this year have certainly helped his confidence, and the speed and the consistency has come with that. Now we are here fighting for the podium and finishing in fourth place, and this is really promising for the future.”

Rally Italia Sardegna (June 3-6) features fast and narrow stages coated with fine and sandy gravel, which is swept away by each passing car to leave rockier and rutted roads. Exposed rocks, as well as trees at the side of the road, can catch out the unwary. Temperatures can often be high, increasing the stress on the cars and the tyres. 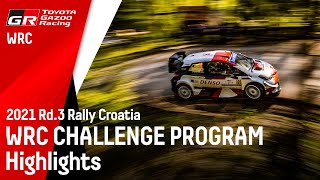