Mostly dry weather made this year’s rally more a test of outright performance than usual, and Ogier set the pace from the start with five straight stage wins as he opened up a lead of half a minute by Friday lunchtime.

The GR YARIS Rally1 HYBRID was fastest in the first 11 stages of the season, its streak only ended on Saturday afternoon – by which point Ogier was focused on managing his lead. He carried an advantage of 16 seconds over Rovanperä into the final day, when he proceeded to claim his eighth and ninth stage wins of the weekend and finished up with a winning margin of 18.8s.

Ogier’s 56th WRC win is also the first for his co-driver Vincent Landais, in only the second event since he began working with the up-and-coming French navigator at the end of last season. It is also Toyota’s fifth Monte win with a fifth different model of car: the GR YARIS Rally1 HYBRID winning all but two of the 18 stages across the weekend.

With Ogier once more only contesting selected events this season, second place plus victory in the rally-ending Power Stage represents an ideal start to Rovanperä and co-driver Jonne Halttunen’s defence of their first championship titles. Rovanperä grew in confidence and speed during the rally, taking six stage wins in total on his way to a first Rallye Monte-Carlo podium.

Elfyn Evans displayed similarly strong pace to his team-mates throughout the weekend and was second to Ogier before losing around 40s with a damaged tyre in SS5 on Friday morning. He and co-driver Scott Martin fought back to finish fourth, 27.8s from the podium despite a brief spin on Sunday morning. He was also third in the Power Stage to claim three additional bonus points.

The strong start to the season for TGR was completed by Takamoto Katsuta in his WRC Challenge Program-supported entry. He produced his strongest Rallye Monte-Carlo performance to-date alongside co-driver Aaron Johnston, frequently joining his team-mates in the top-four on stage times and finishing sixth overall.

Quotes:
Akio Toyoda (TGR-WRT Chairman)
“Congratulations on the ninth victory for Seb and the first victory for Vincent in Monte Carlo! It was the start of the second season for our GR YARIS Rally1 HYBRID. The team began the preparation for this season right after Rally Japan last year, made lots of updates to the car in a short period of time, and made it ready for this first round. I really appreciate all of the team members who always work so hard without having much time-off even in holiday season. In response to their efforts, Seb and Vincent won the rally and the other crews completed all the special stages. It became a great season opening as a team. Thank you very much to all!

There was another big change in the off-season: the team has become a new company, ‘TOYOTA GAZOO Racing World Rally Team’. With the new company, we will not only aim for victory in WRC but also take on various challenges including product development to make the sport of rally more wide-ranging and sustainable. Jari-Matti, the Chief Rally Sporting Officer (CRSO), Tom Fowler, the Chief Technical Officer (CTO), and all the employees here love rally and cars. We will continue our challenges together to bring more smiles to people's faces through rally and cars.

P.S. to the drivers and co-drivers,
Remember that we had fun together dirt driving after Rally Japan? That place was located in a city called Gamagori, and now the city has interest in holding rally events and making it a city like Monte Carlo. Today, there was an event there and I participated as a member of TOYOTA GAZOO Racing World Rally Team. I wore the same overalls as you and had fun making donuts. I think people who saw me were able to experience the joy of rally. In the future, when the city becomes like Monte Carlo, please come back and drive there again!”

Jari-Matti Latvala (Team Principal)
“We are very delighted with this result, it’s an amazing way to start the season. We were expecting tough competition this year and we were not sure how this rally would go, but all of the work that everybody in the team has put in has really paid off. Coming here to Monte Carlo I knew Sébastien was very motivated after coming so close to victory last year. You could see that hunger in his eyes from the start on Thursday night and after that he did a perfect drive. At the same time I’m also very happy to see the great pace of Kalle, of Elfyn and of Takamoto. Kalle improved step-by-step for his first Monte podium and I’m sure next year he will be ready to win here. We can see that the car is performing very well but we know we have to keep working.”

Kalle Rovanperä (Driver car 69)
“I have to say we are really happy with this weekend. There was a bit more road cleaning for us to do in the beginning of the rally than I had expected, so we lost a lot of time there, but after that the pace was really good. When we had a clean road we had the same pace as everybody else, we were fighting for the top times, and finally we could also take full points on the Power Stage so we have really good points to start our season. The team has done a great job with the car; I think all of us were fast and quite confident in the car. Big congratulations to Seb: he’s the master of Monte Carlo.”

Elfyn Evans (Driver car 33)
“Overall the weekend has been a positive one for us. It’s been a pretty good one in terms of pace and we probably had the potential to achieve a bit more. Some frustration on Friday put us out of contention for the podium but that’s rallying and the way it goes sometimes. After that, fourth was probably the best we could have done and the gap to third was just a bit too big. Still it’s solid points to start the season and a decent performance. The car was working really well; the team have been working hard and it shows in the overall result here.”

Sébastien Ogier (Driver car 17)
“It has been a perfect weekend. This rally means a lot to me and to win it is always something very special, so I’m going to really enjoy it. I think I can be proud of myself and proud of my team. It’s been quite a dominant weekend for the team. Toyota once again provided us with fantastic tools so thanks to them. It’s an amazing way to launch the season with a one-two finish and it was a strong performance from Kalle as well. Yesterday was hard for my nerves; I knew I could go faster but I didn’t want to take risks at all. Today I knew it was more about pure driving and could enjoy the end of the rally. I’m so happy for Vincent as well. It’s his first WRC win and he deserves it so much; he has done a perfect job to my right-hand side in only our second rally together.”

What's next?
Rally Sweden (February 9-12) is the only full winter event of the season taking place on snow and ice. Metal studs inserted into the tyres bite into the surface to provide grip and allow for some of the highest speeds of the year. 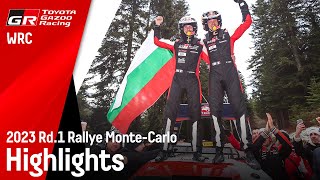