TOYOTA GAZOO Racing (TGR) announced on November 18 its domestic and international rally entry structure and the outline of TGR Rally Challenge for the 2023 season.

TGR will continue its practice of making ever-better motorsports-bred cars and pursuing activities to enhance the appeal and sustainability of motorsports.

■Major Results for the 2022 Rally Season

We will continue honing our cars through competition on all kinds of roads around the world to further promote making ever-better motorsports-bred cars, and we aim to win the three titles (manufacturer, driver, and co-driver) for the third year in a row under the leadership of Jari-Matti Latvala.

To achieve a sustainable motorsports industry, we will continue to implement programs aiming to cultivate and produce young drivers who can actively compete in top categories in Japan and around the world by discovering and nurturing outstanding talent and supporting advancement to the next level.

We will hone human resources, with Toyota Motor Corporation employees participating as the team principal, engineers, and mechanics, continue making ever-better motorsports-bred cars, and engage in activities to broaden the base of rally fans.

Organizer: TOYOTA GAZOO Racing Rally Challenge Secretariat
The TGR Rally Challenge is held throughout Japan as an introduction to Japanese rallying based on the concept of a participatory rally that anyone can easily enter. Holders of a Domestic B License issued by the Japan Automobile Federation (JAF) can compete, and the competition’s appeal is that not only sports cars such as the GR86 and GR Yaris but also cars such as the Yaris and Aqua with automatic transmissions can participate.
Also, for holding rallies, we work together with people in each region to boost local communities through “rally tourism”, which combines rally spectating with sightseeing for experiencing regional charms, conduct “Good Driver Lessons”, in which we apply our knowledge and skills cultivated through motorsports to safe driving, and organize the selling of local specialties and the setting up of food trucks.
For details, please see https://toyotagazooracing.com/jp/rallychallenge/ (in Japanese).

“Two years ago, I asked Jari-Matti for one thing: to create a professional team with a family-like atmosphere.

The other day, for the first time, I was able to spend time with the team. During that time, I truly felt that the team, including myself, was a family. No matter what we talked about, it always ended up being about cars. I feel like we are the "most car-loving family in the world," which is something you can't find anywhere else.

Though the season just ended, I can't help but look forward to another year of competing in WRC with this team.

Kalle and Jonne will be entering the season as defending champions. With that, there may be a different level of pressure. However, we have teammates who have won the championship six years in a row that can help them. Since this is only their second year fighting for the championship, we will strongly support them to have another great season.

Though Elfyn and Scott had a difficult year in 2022, we will do our utmost to support them by building a strong car for a year in which we can achieve stronger results. So let’s make it a great year together!

Seb made a great contribution to the team despite his part-season entry, and I have the same expectations for him in 2023. His contribution was not only in points but also as a leader for his young teammates. Next season, he will share the car with Takamoto, and I hope he will continue to help this team to become even stronger. Our newest addition, Vincent, will be under a lot of pressure, but I’m hopeful he will be able to contribute to the team along with Seb.

Takamoto and Aaron will be driving for the manufacturers’ championship next season. It was their driving that got us to the finish line no matter how challenging the rally was. We ask for that level of driving again in 2023 as well.

The GR Yaris was built to win in WRC, and in its first year in WRC, we were able to take home the championship. Looking ahead, 2023 will be quite the test for the GR Yaris, as it will take on its next challenge, “Rally2”.

The challenge is not only to make a winning car for us, but also to make a winning car for our customers. I asked Norihiko Katsuta to take on this challenge next year in the Japanese Rally Championship. Similar to last year when we started competing in the Japanese Rally Championship with the GR Yaris rally car, we may have some problems at first, but we will continue to refine the car and make it a "championship level car".

Morizo is currently competing in the Rally Challenge in a GR Yaris. I hope to be able to participate again in 2023 as long as time permits. The number of GR Yaris entries in the Rally Challenge is increasing, and although there is a big difference in speed range from the top category of WRC to the grassroots rally, Rally Challenge, we hope that the GR Yaris will be "a car that any driver can enjoy driving with confidence".

In the pursuit of “making ever-better cars", Toyota will continue to participate in rallies in 2023.

P.S.
Esapekka, and Janne, thank you for competing with us this season. Though you may be our rivals next year, we look forward to seeing you again at the podium. Please make sure you don’t roll three times!

P.S. 2 To Jari-Matti as a driver,
Although I consider it presumptuous to take on Jari-Matti, who was a WRC driver... I consider you to be my rival. So when I drive with you, I can't help but be aware of each other's lap times.

The first time we competed was at Fuji 24 Hours in June. I won the qualifying and you won the final, so the result was a draw.
We also spent the holiday after Rally Japan together on a dirt course. I won that time. That course was the very place where I developed the GR Yaris. This was the original "home-course" where I developed the car and Morizo himself in the early stages of development. So, I couldn't afford to lose here.

Next time we will face off in Finland. The frozen lakes in winter are your home course, as you won in Sweden.

If you can't beat me there either...then why don't we go to the Japanese Rally Championship next? You couldn't drive in Rally Japan because you were the team principal, so I would love to have you race the roads of Japan as well. Maybe around Hokkaido, where you once stood on the podium?

Jari-Matti Latvala:
“As a team we have enjoyed an extremely good season in 2022. To win all three titles for the third year in a row will be a big challenge but that is certainly our target next season and we need to keep working together to achieve it. It’s very nice to welcome Takamoto into our main line-up to share a car with Sébastien while also still gaining the experience of a full season. We believe the time is right for him to make this step: In 2022 he was the WRC’s most consistent scorer so we are confident he can bring good points for the team. Our other drivers have all proven they can win rallies and fight for championships. Kalle will have a new challenge trying to defend his title but he will be very motivated and loves driving the car. For Elfyn on the other hand it has not been an easy 2022 season but he finished it with a good feeling in the car and we are sure he will be strong in 2023. Finally, Seb has shown that even when doing a part-season he has the pace to win and he brings a lot to the team.”

Kalle Rovanperä:
“It has been a great three years already with this team, especially during this past season obviously when we could achieve some amazing results. Hopefully we can continue in a similar way next year and fight together with the team to win all three championships again. I think it will be an even bigger challenge to defend our titles because the competition is getting tougher all the time, but we will of course try our best.”

Elfyn Evans:
“I’m excited to be heading into my fourth year with TOYOTA GAZOO Racing. We obviously enjoyed some great success already in our first two years together, and although 2022 didn’t deliver quite what I was hoping for on my side, I’m very happy to be part of such a successful team and one which is working so hard to improve all the time. Hopefully we can make 2023 a much stronger year on a personal side and continue the great success of the team.”

Sébastien Ogier:
“I’m very happy to continue my cooperation with TOYOTA GAZOO Racing in 2023 with a partial programme, similar to what I have done this year. It’s something that I’m really enjoying, as it gives me the chance to race for a top team and keep following my passion, while also having a bit more time with my family and to do some different things. For me it’s great to carry on with the team and I look forward to fighting for more wins together.”

Takamoto Katsuta:
“I’m really excited to make this next step in my career. To have this kind of role with the team has been a big target for me and I want to thank TOYOTA GAZOO Racing for giving me such an amazing opportunity. Of course it will bring a bit more pressure than before, but I am very motivated to keep working hard to be ready for next season and to do the best job I can for the team.” 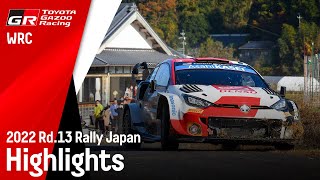