Elfyn Evans leads Rally Japan for the TOYOTA GAZOO Racing World Rally Team at the end of the first day of true mountain stages on Friday, with team-mate Kalle Rovanperä rounding out a closely-fought top three.

Following Thursday night’s short first stage in Kuragaike Park, the crews faced demanding, twisting and technical roads in the mountains to the north-east of the service park in Toyota City. Friday’s opening stage Isegami’s Tunnel was the longest of the rally at 23.29 kilometres and provided some early drama, which Rovanperä avoided to set the best time and take the rally lead. Evans was then fastest in the Shitara Town test by an impressive 4.3 seconds to share the rally lead with Thierry Neuville returning to Toyota Stadium for mid-day service.

In the afternoon, Evans was quickest again in a shortened second pass of Isegami’s Tunnel, before Rovanperä ensured a clean sweep of stage wins for the GR YARIS Rally1 HYBRID with the best time in Inabu Dam. There, Evans was only 0.3s slower as he opened up his lead to 3s over Neuville, and Rovanperä is only 2.1s further back.

There are three Toyota drivers inside the top five with Takamoto Katsuta fifth in his first ever home round of the WRC. After setting some strong times he is still within 20.6s of the lead in his TGR WRT Next Generation entry.

Sébastien Ogier led after SS1 but was among those to encounter trouble in SS2, having to stop to change a wheel and tyre and dropping over two minutes, ending the day in 10th overall.

Quotes:
Jari-Matti Latvala (Team Principal)
“Even though today was unfortunately a shorter day than planned, it was still a very tough day for the drivers. With so many corners, the stages are turning all the time and they’re also deep in the forest so the grip levels are changing all the time. It’s not easy conditions but our drivers and our cars have been performing well and we can be very satisfied at the end of the day. Unfortunately Seb lost some time this morning but Elfyn and Kalle are right up there and so is Taka in his home event. We have seen very close competition which is great for the fans and it makes it very interesting going into tomorrow with such small margins and more new stages to come.”

Sébastien Ogier (Driver car 1)
“Unfortunately for us the hope of a top result here ended very early this morning with this puncture in the first stage. It’s very frustrating of course, and we’re not sure why it happened but we had to stop to change the wheel and lost over two-and-a-half minutes to the lead. Now the excitement is not quite the same when you’re no longer fighting for victory, but of course we’ll try to keep pushing and to keep enjoying these stages. It’s also an opportunity to work with my new co-driver Vincent who is doing a very good job so far, and also to work with the setup of the car. These roads are very unique and the feeling is not yet at the optimum like we had in Spain on roads we knew very well.”

Elfyn Evans (Driver car 33)
“It’s always nice to be leading at the end of the day but there’s still a long way to go, so it doesn’t mean too much just yet. The morning’s first stage was very demanding and a proper wake-up call. We lost a bit of time in there but then we had a good run through the second stage that we did, and we’ve followed that up with a decent afternoon as well. It’s still been pretty difficult, very twisty and very technical, and the grip levels have been changing all the time. The character changes within stages so we need a car that works well in many different scenarios. Again there will be a bit of everything tomorrow but we’ll give it our best as always.”

Kalle Rovanperä (Driver car 69)
“It’s has been not too bad today and it’s still fairly close, so we can be somewhat happy. It definitely wasn’t easy driving these stages, with a lot of corners all the time. Without testing and going onto fully new roads, it’s not easy to have everything feeling 100 per cent straightaway – especially on these types of roads, as I like to have the balance a bit different to the others. We made some changes at lunch and it was better this afternoon. If we can find a bit more precision with the car I will be able to push harder tomorrow.”

What's next?
Saturday takes the crews south-east for a loop of three stages in the morning, followed by service in Toyota City. The first two stages are repeated in the afternoon before two passes of a super special stage in nearby Okazaki City round out the day. 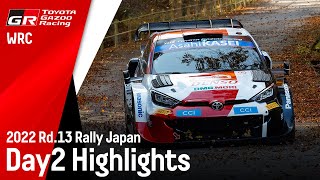