The TOYOTA GAZOO Racing World Rally Team continues to fight for the victory at Rally Japan with Elfyn Evans only four seconds from the lead going into the final day of the season.

Encountering more new and demanding asphalt stages in the mountains of the Aichi prefecture, Evans made a strong start to the day with the fastest time in the opening stage, and increased his rally lead to 6.5 seconds over the course of the morning. In the afternoon, the tables were turned and rival Thierry Neuville took over the lead in SS12, with Evans just four seconds behind after the Okazaki City super special that rounded out the day.

Takamoto Katsuta continues to perform well on his home rally and is up to fourth overall in his TGR WRT Next Generation entry, 23s from a podium position.

Sébastien Ogier set an impressive pace through the day, winning three of the five mountain stages and fighting back to fifth position overall after the time lost on Friday morning changing a tyre.

Kalle Rovanperä began the day in third position overall, just 5.1 seconds from the lead, but dropped out of contention when he had to stop in SS8 to change a wheel after running wide and making contact with a wall. Further tyre damage required him to drive cautiously back to mid-day service, and after conducting setup work during the afternoon he is 11th overall.

Before the stage in Okazaki, TOYOTA GAZOO Racing demonstrated two concept cars as part of its goal to develop a more sustainable motorsports industry. The GR YARIS Rally2 Concept was unveiled for the first time with Juha Kankkunen behind the wheel, while the hydrogen-fuelled GR YARIS H2 was driven by his fellow four-time world champion, Tommi Mäkinen.

Quotes:
Jari-Matti Latvala (Team Principal)
“This morning Elfyn was very strong again with good confidence in the car and great attacking driving. In the afternoon it seems that Thierry was stronger but Elfyn is only four seconds back with quite a long final day still to go. We’re expecting the weather to change and for the rain to come which will make it more difficult for all the drivers – but that always gives opportunities too. Taka has been driving very well and with the rain coming we hope the chance to fight for the podium is still there. Kalle’s chances unfortunately ended when he touched the wall this morning, so now he’s been testing with the car a little bit, while Seb has been driving really well and building up the confidence with his new co-driver which is great to see. Now we will keep fighting into the final day of the season!”

Sébastien Ogier (Driver car 1)
“It’s been a positive day for us. To be fastest over the day is always good and it’s been enjoyable in the car with a good rhythm. We’ve been working on the setup, trying to make the most of this opportunity and we now have a better idea on how we should set-up the car for conditions like these. It’s also working well with Vincent, who is doing a great job. Unfortunately we’re not fighting for so much anymore in terms of positions, but we managed to get into the top five which was the maximum we could do on speed. But tomorrow will be a long day with rain expected and many things can still happen.”

Elfyn Evans (Driver car 33)
“We got off to a good start this morning. Everything was working well in the car and we managed to extend our lead. Then this afternoon we were not performing as well as we would like. I was still trying but I was struggling to find the same feeling and deliver the stage times. We’ll need to have a look tonight and try to understand why that was. It’s unfortunate to be in this position now after the strong morning we had. But it’s still pretty tight – like it has been for the whole rally – and there are plenty of kilometres left in which to fight back, and if the rain comes as expected then it could be a complicated day.”

Kalle Rovanperä (Driver car 69)
“Things got a bit tricky for us staightaway in the opening stage this morning. I got caught out in a slippery braking area which I didn’t have in the pacenotes and we went a bit wide and broke the wheel. We had to stop and change it, so basically we lost the chance to fight for the podium right there. This afternoon was more positive, not necessarily in terms of pace but we were trying some new things on the car and learning a bit about the setup. There is nothing for us to fight for now so it’s just trying to manage everything. Let’s see how the rain is tomorrow but it seems like it will be a big challenge.”

What's next?
The final day of the season is formed by a single loop of five stages totalling 69.82 kilometres. The route takes crews north-east from Toyota City and into Gifu prefecture with three stages to be tackled along the way, before the Ena City and Asahi Kougen tests are then repeated on the way back: the latter serving as the season-ending Power Stage. 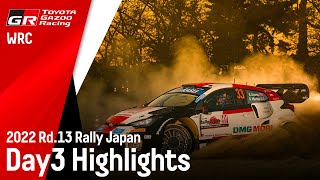