The TOYOTA GAZOO Racing World Rally Team claimed another one-two finish in a thrilling conclusion to the first ever Croatia Rally held as part of the FIA World Rally Championship. In a final-stage decider that went right down to the last metres, Sébastien Ogier and Julien Ingrassia claimed the victory by just 0.6 seconds over their team-mates Elfyn Evans and Scott Martin in one of the WRC’s closest ever finishes.

Just 10.4s covered the top three cars going into the final day of the rally, with Ogier 6.9s in front of Evans. In the opening two stages of the final day, Evans was the fastest driver and took the lead away from Ogier – who had earlier been involved in a traffic incident on a road section, from which everybody thankfully came away safely. His car was able to continue in the rally, albeit with damage to the right-side door and aerodynamics.

Evans and Ogier began the deciding Power Stage separated by 3.9s, and needing to push to secure the one-two result with only a narrow margin back to third place. In the end, Ogier was fastest through the stage and claimed the victory, Evans completing 4.5s slower after running wide close to the end. The final winning margin was the third closest in WRC history.

With a maximum points haul, Ogier moves back to the top of the drivers’ standings and the team extends its lead in the manfuacturers’ championship to 27 points.

Takamoto Katsuta claimed his third consecutive sixth-place finish in the Toyota Yaris WRC he drives as part of the TGR WRC Challenge Program, having impressed with his pace and two stage wins on Saturday alongside co-driver Dan Barritt.

Quotes:
Akio Toyoda (Team Founder)
“I’m very proud that our crews delivered victory to the team in this new Croatia Rally. To Seb, Julien, and the team, congratulations! Seb and Julien had an unexpected accident on the road section. After this they weren’t able to compete with their car in perfect condition on the final day, but they never gave up and they finally won the rally. I really appreciate their hard work. Elfyn and Scott also did great by finishing so close behind. It’s wonderful that we achieved a one-two finish.”

“It was also great that Takamoto won two stages. It would be nice to say that the advice I gave him when we met in Japan a few weeks ago was helpful, but it’s all about his own improvement through his continual efforts. I’m looking forward to seeing his improvement in the coming events as well. Kalle and Jonne’s rally ended very early. I was relieved to know that they were both OK and I believe they still learned from this rally.”

“Led by Jari-Matti, the team shows its strength in every rally with all team members working together. The events come without much break after the next one Portugal. Taking our health as the first priority, we continue our preparations. To our fans, please continue cheering for the TOYOTA GAZOO Racing World Rally Team. We always appreciate your support and encouragement. Thank you very much.”

Quotes:
Jari-Matti Latvala (Team Principal)
“It is so tense and exciting following the action on the stages when our drivers fighting for the victory like they were today. I feel very sorry for Elfyn, he went a little bit wide on the last corner and basically it was lost there, but they both had to push, and Seb did a brilliant final stage. We are happy, we need to be proud of what these guys have done this weekend and for another one-two finish, which is an amazing result for the team.”

Sébastien Ogier (Driver car 1)
“It has been a real rollercoaster of emotions this weekend. The most important thing is that everyone is safe after what happened this morning on the road section; this was my main concern when it happened. I also thought my rally could be over, but the car was not too badly damaged and we could carry on. I’m not sure I believed it was possible to still win after everything that happened, but I think everybody knows that I never give up and I tried to keep fighting until the end. I feel for Elfyn who did a good job this weekend and was especially strong this morning. But we had good pace this weekend and just had some issues that slowed us down at times. It’s nice to share the podium in another one-two for the team.”

Elfyn Evans (Driver car 33)
“To come second is never the way you want to finish when you go into the last stage with the lead. Obviously, Seb had a very, very strong last stage and unfortunately for us we made an error on what was basically the last proper corner. It’s frustrating but at the same time it’s a solid result, and a very good result for the team. They have done a great job to give both Seb and I a fantastic car this weekend. We fought tooth and nail all the way through and it was good fun.”

What's next?
Round four will be the first gravel event of the year: Rally de Portugal (May 20-23). Based in Matosinhos near Porto in the north of the country, it features classic stages on sandy and rocky roads. Grip can be difficult to find on the soft roads during the first pass through the stages, while rocks can be exposed and deep ruts can form during the second pass. 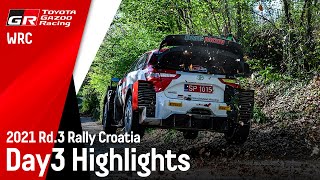