The Rally de Portugal is underway for the TOYOTA GAZOO Racing World Rally Team with a super special stage on the streets of Coimbra, ahead of the first competitive gravel action of the 2022 FIA World Rally Championship.

Thursday began with shakedown and a chance for the teams to fine-tune their gravel setups with the new-for-2022 hybrid Rally1 cars. The GR YARIS Rally1 was fastest through the 4.55-kilometre shakedown in the hands of Elfyn Evans after three passes by each driver, with Sébastien Ogier seventh-quickest Kalle Rovanperä eighth.

The crews then headed south from the service park near Porto to the centre of Coimbra for the start ceremony and tricky opening stage, which was held entirely on asphalt roads but with gravel setups and tyres on the cars. All four GR YARIS Rally1 drivers made it safely through without incident and within 3.5 seconds of the best time. Ogier was fastest of them in fifth with Rovanperä sixth and Evans ninth, while Takamoto Katsuta was seventh in his TGR WRT Next Generation entry.

Quotes:
Jari-Matti Latvala (Team Principal)
“It’s great to be starting a rally like this once again with a super special stage for the fans. They are never easy for the drivers because you don’t want to do a mistake and you don’t want to lose too much time either, and it’s tricky to find that balance. So I’m happy to just see our drivers finish the stage without any issues and with the times still very close. Shakedown this morning was the first chance to run the GR YARIS Rally1 on gravel against our competitors, so for Elfyn to set the fastest time was encouraging and suggests we should be on the pace this weekend. But tomorrow will show us were everybody really stands so it will be an exciting day to follow, and having no proper midday service just adds to the challenge.”

Sébastien Ogier (Driver car 1)
“It was a nice start with this super special and it’s great to have the fans back at the rallies, especially here in Portugal where there is always such an incredible atmosphere. After shakedown the feeling was not optimal yet but it’s still very early in the weekend and there’s certainly potential to make adjustments with the car, as everybody is still in the learning phase on this surface. It feels nice to go into tomorrow without the usual disadvantage of cleaning the road and we need to make good use of that and try to find the rhythm again as soon as we can.”

Elfyn Evans (Driver car 33)
“It’s good to get the rally started with a clean run through the super special, and it was nice to see it so busy with fans as we expect on this event. Shakedown went well this morning: The car was feeling quite good to be honest and we had no major dramas. It’s good to start in that way but of course it doesn’t count for much towards the rally. It’s going to be a challenging weekend with so many unknowns, and the hot weather that’s forecast is likely to make it particularly demanding.”

Kalle Rovanperä (Driver car 69)
“It’s always nice to do these stages where there are a lot of fans, and the atmosphere is really good like always in Portugal. We had a clean drive. It’s good to be back on gravel this weekend and everything seemed to working fine in shakedown, with just a few small tweaks to the car between runs. Tomorrow will be a really big challenge and an important day for our whole weekend. We’ll try to be on a good pace and not lose too much time from our starting position.”

What's next?
From Coimbra, the crews tackle a loop of three stages tomorrow morning around nearby Arganil, which hosts a tyre fitting zone before the same tests are repeated. The afternoon features an additional stage at Mortágua plus an evening super special at the Lousada rallycross circuit upon returning north to Porto. 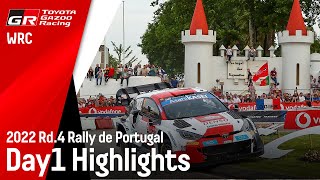