The TOYOTA GAZOO Racing World Rally Team has got Safari Rally Kenya underway in style with the fastest time for Sébastien Ogier in the spectacular super special stage in the capital city Nairobi.

After the crews completed their reconnaissance of the challenging gravel stages on Monday and Tuesday, they took part in the pre-event shakedown on Wednesday. With testing outside of Europe not allowed by the regulations, this provided the team with an important opportunity to adapt the setups on its GR YARIS Rally1 cars for the event’s unique demands, with Kalle Rovanperä recording the fastest time.

The rally began with a start ceremony in Nairobi on Thursday lunchtime prior to the opening stage at the nearby Kasarani super special. With drivers competing head-to-head around the 4.84-kilometre course, last year’s rally winner Ogier claimed the honours to take the early rally lead by a mere 0.6 seconds.

Elfyn Evans was fourth fastest, only 1.2s away. Rovanperä was 11th after he ran wide and damaged a tyre, but remains within 12s of the lead with three full days of rallying ahead. Takamoto Katsuta is sixth in his TGR WRT Next Generation entry.

Quotes:
Jari-Matti Latvala (Team Principal)
“It’s good to get the Safari Rally started and to put on a show for all the fans in the super special. It doesn’t tell us so much for the rest of the rally, which will be very different compared to this stage. It’s unfortunate that Kalle pushed a tyre off the rim and lost a bit of time, but I don’t think that will matter too much because we can expect a lot of things to happen over the rest of the weekend and for the time gaps to be bigger than we normally see. In the recce, the crews have seen that the conditions will be tougher than last year. The second pass especially could be quite rutted in places, so the drivers will need to be patient not to attack too much. But shakedown was a good chance to test how the car was handling these conditions, and I think our drivers are feeling confident for the weekend.”

Sébastien Ogier (Driver car 1)
“It’s great to go to Nairobi to start the rally and see so many people and so much support, and this first stage is pretty good to drive as well. It’s nice to also have the quickest time but it doesn’t count much towards the rally with such a demanding weekend ahead of us. The rest of the rally looks even more challenging than last year. Some sections are very difficult and it’s going to be about surviving these places, so it will be a difficult task to find the right rhythm.”

Elfyn Evans (Driver car 33)
“This first stage in Nairobi is actually a really nice one and a great way to start this event, and we were able to have a clean run through. But now we have a very different challenge ahead of us for the rest of the weekend. Generally the conditions in the stages seem to be rougher than last year and there’s also a lot more soft sand this year. There will be points where you need to drive quickly and others where you have to try and preserve the car. It’s difficult to judge the balance but we have to try and find it.”

Kalle Rovanperä (Driver car 69)
“It’s nice to get the weekend started and to see so much support for the rally. In the first corner of the stage I was a bit on the limit with the braking and we went wide and damaged the tyre, which was a bit of a shame. But it’s a long rally ahead and we didn’t lose too much time, so now we just need to try and focus for the rest of the weekend. In shakedown yesterday we tested a few different things and it felt pretty good. I don’t think we’ll be in the best starting place tomorrow, being first on the road, but let’s see how it goes.”

What's next?
On Friday the crews face a full day of stages around Lake Naivasha. A loop of three stages is run twice either side of service, and begins with an extended version of the twisty and technical Loldia stage. The brand-new Geothermal test follows before Kedong, which is the longest stage of the weekend at 31.25 kilometres. 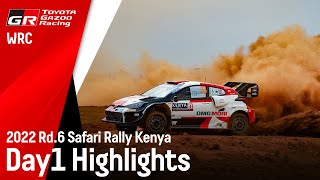