Following the super special stage in Nairobi that began the rally on Thursday, today the crews faced two loops of three stages around Lake Naivasha with rough and sandy conditions that were tipped to be more difficult than those experienced when the event returned to the FIA World Rally Championship one year ago.

The GR YARIS Rally1 coped well with these demands and dominated the day, winning all but the morning’s first stage and remaining in the overall lead throughout. Sébastien Ogier stayed in the lead for much of the day just ahead of his team-mates, but the 2021 event winner lost over two minutes in the afternoon’s final stage when he had to stop and change a tyre, leaving him sixth at the end of the day.

For Rovanperä, running first on the road as championship leader proved to be a disadvantage in some places and an advantage in others depending on the varying road conditions.

The day’s final stage, the second pass of the rally’s longest test Kedong, was especially challenging with deep ruts and soft ‘fesh-fesh’ sand. Rovanperä’s third stage win of the day here allowed him to move into the rally lead by 22.4 seconds over Evans, who had also taken a turn in the lead earlier after Kedong 1.

On a rally where he finished a career-best second last year, Takamoto Katsuta was running in the same position after SS6. He ended the day fourth – just 1.3s from third position and 4.2s from second place – and may yet be given time back after he was hampered by the dust of another driver on SS7.

Quotes:
Jari-Matti Latvala (Team Principal)
“It’s been a very good day for us in really tough conditions. We have seen drama and retirements for others but all our cars arrived back in service tonight without major issues, with two of them holding first and second overall, so we have to be really happy. It could have been even better if Seb didn’t lose time in the final stage, but this is the nature of this rally; it’s very rough and demanding for the tyres and these things can happen. But everything is still open: Last year we saw Seb come from two minutes back to win the rally. Tomorrow will be another very tough day but our drivers have been very wise so far and they just need to approach tomorrow the same way.”

Sébastien Ogier (Driver car 1)
“Up until the last stage it was a good day. The rhythm was good and I tried not to attack too much because we know that it’s important to manage things on this rally. The last stage was the one we all feared the most today because we knew there were some rough and rocky sections. With 10 kilometres still to go we had no choice but to stop and change the tyre, because it would not have been possible to get through the ‘fesh-fesh’ near the end on three wheels. It’s never good to lose two minutes, but there are still two days to go and many things can still happen. We just need our luck to turn.”

Elfyn Evans (Driver car 33)
“It’s been tough out there and a bit of an up-and-down day to be honest. The first stage of the loop today was really quite a nice stage and I had a good rhythm there, but on the longest stage the conditions were quite rough, and when it gets extreme like that it’s so hard to know how hard to push and it looks like I haven’t pushed hard enough. But we’re still here and that’s the positive thing. The car has been working really well but we know the rally could keep getting tougher.”

Kalle Rovanperä (Driver car 69)
“It has been quite a good day for us. The conditions were very tricky in the last stage of the loop on both passes with the deep sand and I’m really happy to have made it through. The other two stages were not so bad – there was some cleaning to do for us, even on the second pass, but they were quite enjoyable to drive. I think we did a good job and we’re in a nice position now. Tomorrow will be another challenge and the plan will be the same: to try and drive at the same pace and avoid any issues.”

What's next?
Saturday is the longest day of the rally, with 150.88 competitive kilometres. The action takes place further north from Naivasha, close to Lake Elmenteita, with two passes of three familiar stages from 2021 – although Soysambu has been extended and the Elmenteita test itself will be run in the opposite direction to before. 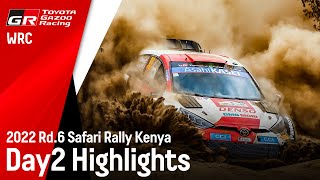