The TOYOTA GAZOO Racing World Rally Team has got Rally Estonia underway with a short super special stage near the service park in Tartu, where the top seven drivers were separated by less than a second.

Earlier on Thursday was the pre-event shakedown, providing the chance to make final adjustments to car setup for the high-speed gravel roads. The GR YARIS Rally1 HYBRID has received an engine upgrade and a revised rear wing as the team seeks to improve the car’s outright performance. The wet conditions in shakedown also gave the drivers the opportunity to get to grips with damp roads, given that further rain is forecast for the rally. Esapekka Lappi posted the best time with his fourth and final pass of the shakedown, with Kalle Rovanperä third and Elfyn Evans fifth.

Following a ceremonial start in Tartu itself, the competitive action began with a 1.66-kilometre super special, run in the opposite direction to last year. Rovanperä set the second-fastest time, just 0.1 seconds from the pace, with Evans another tenth of a second back in third. Lappi was sixth, within 0.7s of first, while Takamoto Katsuta was one place further behind and only 0.9s off the fastest time in his TGR WRT Next Generation entry.

Quotes:
Jari-Matti Latvala (Team Principal)
“I think everybody has been looking forward to this rally, the first on really fast gravel roads with the Rally1 cars. It’s great to have all our cars through the first stage and all within one second of the lead. Already in shakedown this morning we saw some promising times from our drivers but it’s not until the competition really begins tomorrow that we will really know where we stand. Even then, the weather could play a big role, depending on how much it rains and when it comes. A small bit of rain can even give you a bit more grip, but heavy rain could make it very challenging and especially if it falls for the second pass when the roads are already rutted.”

Elfyn Evans (Driver car 33)
“It was a short stage to start the rally tonight but it was very twisty and lined with rocks, so we had to try and be precise. Shakedown this morning was good. The rain came down and we hadn’t really tested in such conditions, but immediately from the first run I felt quite comfortable. It’s always exciting to do these high-speed events but there will still be some learning to do with the car. The weather is also looking pretty unsettled and it’s quite difficult to know how the stages will be affected.”

Kalle Rovanperä (Driver car 69)
“It’s nice to get the rally started with a good time in the first stage. Here there are always a lot of fans from Finland as well as Estonia and it’s great to see them all. In shakedown I had a good feeling in the car already from the first pass. It’s exciting to be going into our first fast gravel rally with this car, and to see how fast we are compared to the others. Tomorrow I would not mind if it’s a bit wet or damp as that could be a little bit better for us running first on the road, but it seems like the weather is going to be quite unpredictable.”

Esapekka Lappi (Driver car 4)
“The start of this rally is always amazing with so many people, it’s a big show. The first stage was slow and technical and you needed to be careful with a lot of rocks in and outside of the corners. It’s completely different to the other stages, but we will do this section a few times during the weekend so you need to be able to get it right. I had a good feeling in shakedown: We didn’t change the settings on the car much because there was no need. I think with the weather the grip level will change many times and there will be a lot of surprises during the rally.”

What's next?
Friday is the longest day of the rally with 139.18 competitive kilometres spread across two loops of four stages. The loop begins with Peipsiääre (the longest stage of the weekend at 24.35 km) and Mustvee to the north of Tartu, followed by Raanitsa and Vastsemõisa to the south. 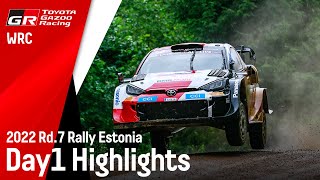