The TOYOTA GAZOO Racing World Rally Team has three cars in the top four positions after the first full day of Rally Estonia was characterised by changing weather conditions. Kalle Rovanperä took the lead ahead of second-placed Elfyn Evans at the end of the day, with Esapekka Lappi in fourth.

After Thursday night’s short opening super special stage, crews faced two loops of four stages on the high-speed gravel roads for which the event is known. The morning’s stages took place in dry conditions and Evans was dominant in the GR YARIS Rally1 HYBRID, winning all four stages and building a lead of 18.7 seconds over his nearest rival Rovanperä, who also had a strong morning considering that he had to sweep the loose gravel roads as championship leader.

Localised rain then fell across the afternoon stages, and while Evans continued his stage-winning streak in the first test of the loop, Rovanperä’s road position later worked to his advantage. He capitalised to win the day’s final three stages, moving into the lead by 11.7 seconds.

Lappi lost time in the morning loop with a lack of confidence under braking because of an issue, but the team was able to resolve this during midday service and he produced a stronger performance in the afternoon, moving up to fourth position overall.

Takamoto Katsuta is seventh overall in his TGR WRT Next Generation entry as he too built his confidence through the varied conditions.

Quotes:
Jari-Matti Latvala (Team Principal)
“It’s been a very good day for us, with a strong performance from our drivers and the car. The weather has made it challenging with the rain and the ruts and the mud, but all our crews made it through the day and to have three cars in the top four is great. In the final stage, Kalle got a bit lucky with the conditions but he also attacked to gain time because he knew it would be even harder for the others behind, so he really made the most of his advantage. Elfyn has been driving very well and has done a really good job, he was just unlucky with the conditions in the end. But anything can still happen in this rally and the conditions could well play a role again tomorrow.”

Elfyn Evans (Driver car 33)
“It's not been a bad day. This morning was very good, I was happy with the feeling inside the car and everything was working really well. This afternoon it was a bit more difficult with the conditions changing all the time, so it was hard to be perfect and easy to be a little bit too careful at times. We had very bad conditions in the last one, which was obviously less than ideal for us. But there’s a long way to go and it’s all to play for still, so let’s see what tomorrow brings.”

Kalle Rovanperä (Driver car 69)
“This morning the conditions were quite dry so there was a lot of cleaning for us, but I think we managed quite well and we didn’t lose too much time. Then in the afternoon the rain came and it was quite tricky, but we had some good times. In the last one it was heavy rain and I knew it was not going to get any better for the guys behind, so I pushed a lot and we could get the lead. Elfyn has been really fast the whole day, and now that we will be close together in the road order we will try to do our best to fight, but we also need to think about the points for the championship.”

Esapekka Lappi (Driver car 4)
“We lost a bit of time this morning because of a small issue with the brakes, which were not giving me the confidence that you need on this rally. But I think we managed that quite well and were still in a good position, and once the team could fix it in the midday service the times were better in the afternoon. We were maybe a bit unlucky sometimes with the rain showers but rallying is an outdoor sport so we can’t complain! I think we’re about where we expected to be, in a position to be there if something happens in front.”

What's next?
The majority of Saturday’s leg follows a similar format to Friday, with two passes of a loop of four stages around Otepää to the south of Tartu. A repeat of Thursday night’s super special close to the service park rounds out the day. 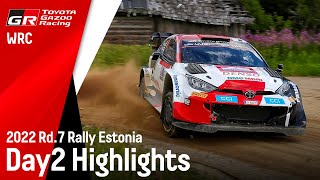