Acropolis Rally Greece is underway for the TOYOTA GAZOO Racing World Rally Team following a spectacular super special stage in front of huge crowds in the Olympic Stadium in Athens.

Following three days of reconnaissance on the event’s rocky gravel roads, the action started on Thursday morning with shakedown close to the service park in Lamia. Here the focus was on one final opportunity to test the cars and setups before the competition began, with Esapekka Lappi the quickest of the team’s drivers in fifth place.

After that the crews headed to the Greek capital for the ceremonial start and the opening stage in the Olympic Stadium, which last hosted the rally 16 years ago. In front of an anticipated 60,000 spectators, cars competed side-by-side in pairs over a technical 1.95-kilometre circuit.

The stage times were extremely close, with championship leader Kalle Rovanperä only 1.5 seconds from the quickest time in eighth place. Lappi was 0.3s further back in 10th despite a brush with a barrier, with Elfyn Evans just 2.8s away from the lead in 15th. TGR WRT Next Generation driver Takamoto Katsuta is 0.7s further back as he begins his debut Acropolis Rally.

Quotes:
Jari-Matti Latvala (Team Principal)
“It’s really nice to be starting the Acropolis Rally in such an iconic location as the Olympic Stadium in Athens, with a full house and a great atmosphere. I got to drive the stage yesterday with the Prime Minister of Greece in the GR Yaris and it had technical corners but was not so narrow, so it’s good fun to drive and a great show for the fans. Still, it’s not easy with the cars set up for tomorrow’s gravel stages, which is where our focus lies. It will be a challenging first full day of the rally tomorrow: Especially in Loutraki where there will be a lot of loose gravel and a tricky job for the drivers opening the road. After shakedown we have been working to try and improve the grip level for the drivers. The main strategy is to avoid problems and try to be clever with the tyre wear and hopefully that will put us in a good position.”

Elfyn Evans (Driver car 33)
“This opening stage was a bit of a first for me as I haven’t driven in a stadium like this before. It was pretty difficult and not the greatest run from us to be honest, but there were a lot of people and it was a nice setting to start the rally. It’s quite a contrast to come back to this type of gravel event, with some pretty rough conditions in front of us. In shakedown the surface was quite smooth but low on grip and we struggled a bit, so we’ve had some work to do, but that’s what shakedown is for. Tomorrow will be quite key with no mid-day service and a lot of first-pass stages, so the cleaning effect will certainly play a part. We will try to have a good Friday to then be in a position to fight on Saturday.”

Kalle Rovanperä (Driver car 69)
“SS1 was crazy with the stadium full of people and hopefully we could put on a good show for them. It was not the most enjoyable drive but definitely one of the coolest stages I’ve done. In shakedown we saw on the first pass that it’s not going to be easy to open the road in these conditions tomorrow, maybe a bit more difficult than we expected. We didn’t really have the grip that we wanted, so together with the team we are doing the maximum that we can to try and prepare. Tomorrow is going to be a tough day with five different stages where we have to open the road. They seem to be the trickiest ones of the rally as well with a lot of loose gravel awaiting us. Like this it will be a long day but we will just do our best to minimise the time loss.”

Esapekka Lappi (Driver car 4)
“Stadium stages like this one are not always the nicest ones to drive for me, but there was certainly a lot of spectators and it’s always nice to feel the atmosphere, so it’s a cool way to start the rally. I fully locked the wheels under braking after the bridge, but I think the car is OK and that the damage is only cosmetic. It’s going to be an interesting event, and probably the toughest of the season for me. Shakedown was very slippery and tomorrow especially looks like it will be a really rough day. But actually, these slow and rough rallies have been pretty good for me in the past. The strategy needs to be a bit different because you need to think about the car as well.”

What's next?
Tonight the crews drive west from Athens to Loutraki, where the first of Friday’s stages takes place. The Loutraki stage itself will be repeated after a single pass over the nearby Harvati. The afternoon journey north to the service park in Lamia includes three more stages: a tyre-fitting zone separates the new Dafni and Livadia tests, which are followed by Bauxites. 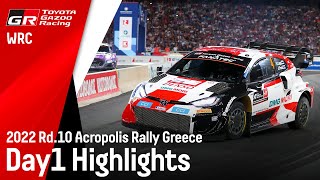