The TOYOTA GAZOO Racing World Rally Team continues to have two of its brand new GR YARIS Rally1 cars inside the top three after the first full day of competitive action on the season-opening Rallye Monte-Carlo. Team-mates Sébastien Ogier and Elfyn Evans were closely-matched and ended the day in second and third overall respectively.

Today was the longest day of the rally in terms of competitive distance, with crews tackling 97.86 kilometres across two loops of three stages, which were separated by a tyre fitting zone in Puget-Théniers rather than a full service. While conditions have generally been milder than usual this year for the legendary event, drivers still faced changing grip levels on the roads of the French Alps.

After winning both of the opening stages on Thursday night, Ogier maintained the rally lead through the day’s first two tests. He completed the morning in third overall behind Evans after taking a cautious approach in slippery conditions in SS5, but moved up to second, ahead of his team-mate, in SS7 before claiming a stage win in SS8. At the end of the day, Ogier is only 9.9 seconds away from the lead with Evans a further 12.1s behind.

Kalle Rovanperä’s confidence and pace improved over the course of the day as he moved up to ninth overall. One place ahead of him, in eighth, is TGR WRT Next Generation’s Takamoto Katsuta, who also showed great progress as he achieved three top-five stage times.

Quotes:
Jari-Matti Latvala (Team Principal)
“I think overall it’s been a good first full day for us in competition with the GR YARIS Rally1. We can see the level of the different cars is quite close: In some conditions I think our car is better and in some conditions another car might be better, but at such an early stage there are always things we can improve. The battle between the two Sébastiens at the top is very close and exciting and I know that they will both fight until the end. Elfyn is also doing a very good job to be in the podium places, and we have seen good progress from Takamoto and Kalle as well today as they get more confident in the car. I’m sure tomorrow will be another exciting day.”

Sébastien Ogier (Driver car 1)
“It’s been a good day I would say, except for the one stage this morning where opening the road was never going to be easy with the icy conditions. I could have taken some more risk but it was not easy to find the limit on that stage. This afternoon I tried my best and I don’t think there was too much potential to go faster. Everything's still very new so of course there is room for improvement, and we’ll try to adjust what we can with the setup to find a bit more speed for tomorrow. But overall it’s positive to be here tonight still in a good position to fight for the win.”

Elfyn Evans (Driver car 33)
“Today has been not too bad but nothing spectacular either. It was disappointing to lose so much time on the last stage. I was perhaps a bit careful in places but I didn’t expect to lose such a chunk of time. The conditions were quite changeable during the whole day, a bit more straightforward on the second pass but it was not easy to judge the changes. But everything on the car has been running as it should with no trouble, so congratulations is due to the team for that because it was a big task to get them ready and to get through a day like this one is impressive. We just need to keep going and see what we can do tomorrow.”

Kalle Rovanperä (Driver car 69)
“Today was a big day of learning for myself. These new cars are very different to what we had before and I’m trying to change the balance to be closer to my style as well as adapting and improving my driving. It was a tough morning but in the tyre fitting zone we could make some bigger changes and that improved the car for me. Over the course of the day we made many steps and it was getting better all the time, and we will try to do something more for tomorrow.”

What's next?
Saturday follows a similar format to Friday but with the action taking place further west from Monaco around Digne-Les-Bains, which hosts the mid-day tyre fitting zone. Of the three stages run during the morning, only two are repeated during the afternoon, but the crews will be away from the service park for almost 13 hours. 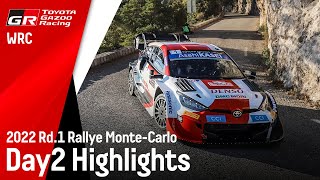