The TOYOTA GAZOO Racing World Rally Team has kicked-off Rally Italia Sardegna with a smooth run through a super special stage in Olbia ahead of what is set to be a demanding weekend on the island’s sun-baked gravel roads.

Thursday started with the pre-event shakedown, where all three of the team’s drivers placed inside the top five: Esapekka Lappi looked immediately at home ahead of his first gravel rally in the GR YARIS Rally1 and set the second-best time, with Elfyn Evans third and championship leader Kalle Rovanperä in fifth.

In the evening the crews tackled the brand new Olbia – Cabbu Abbas stage, a 3.23-kilometre test that combined asphalt roads around the city with an arena section on gravel. Here there were four GR YARIS Rally1 cars in the top five, with Takamoto Katsuta fastest of them in second in his TGR WRT Next Generation entry, just half a second from the rally lead. Evans was next in third with Lappi and Rovanperä setting the equal fourth-fastest time – just one second from the lead.

Quotes:
Kaj Lindström (Sporting Director)
“This rally will be the toughest one of the season so far, and with the high temperatures we have here in Sardinia, the reliability of the cars and the tyre management will be two key elements that we are focusing on this weekend. There has been a lot of work for the team in the short period since Portugal, but the drivers were all happy after shakedown and the first stage went well for us too, with all of the guys keeping it sensible and getting through it cleanly ready for tomorrow.”

Elfyn Evans (Driver car 33)
“The super special tonight was a pretty nice stage but it’s just a small taster for what’s to come. It didn’t feel so great but the time wasn’t bad. After Portugal we already had a few ideas where we could improve the car further and we worked through a few of these in shakedown. Like always here in Sardinia, I think we have a challenging weekend ahead. There’s obviously some pretty hot weather to contend with and quite rough conditions generally, so it’s going to be a challenge for the cars and the drivers. We have to be smart and try to pick our moments when to push and when to look after things.”

Kalle Rovanperä (Driver car 69)
“The super special was quite enjoyable with some proper gravel and corners. I made a mistake in one corner but otherwise it was good. It’s nice to be back in Sardinia. This is always a tricky rally and this year it looks like the conditions are going to be tough for the cars and the drivers. In shakedown we made some changes to the setup after the first runs to try and find a better feeling on these roads. Opening the road tomorrow will be a big job: The gravel is much more slippery here so it will be a tricky task to make it through without mistakes and also be fast, but we will again try to do our best.”

Esapekka Lappi (Driver car 4)
“The first stage was super slippery. I had expected it to have more grip and I was maybe a bit too spectacular. I always have a good feeling coming to Sardinia and in shakedown this morning the car already felt very comfortable from the first run and I was feeling pretty confident. What we carried over from our test last week was working well, so I’m feeling happy before the real stages start. The biggest topic this weekend is the heat, so it will be tough for the drivers and also for the car.”

What's next?
The crews remain in Olbia overnight ready to tackle two stages nearby to the south-west: Terranova and Monti di Alà e Buddusò. These will be repeated before returning to Alghero for midday service. Another pair of stages towards the northern coast are then run twice in the afternoon: Osilo – Tergu and Sedini – Castelsardo. 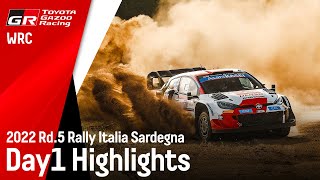