The TOYOTA GAZOO Racing World Rally Team experienced a difficult Saturday on the rough roads of Rally Italia Sardegna, with Kalle Rovanperä now its highest-placed driver and up to fifth overall.

Esapekka Lappi led the field by 0.7 seconds overnight after a strong performance through Friday, but he was forced out of contention in the morning’s first stage after consecutive impacts on either side of a narrow section of road damaged both rear corners on his car. The team has been able to repair the damage so that he can restart tomorrow.

Hampered by opening the loose gravel stages on Friday, Rovanperä saw his closest championship rival retire during the morning loop, meaning he could adopt a more cautious approach with the aim of extending his advantage at the end of the weekend. Even still, he was able to improve his times in the afternoon, placing in the top three on both passes of the Coiluna – Loelle stage to close up on fifth overall and take the position on the day’s final test.

Takamoto Katsuta is one place behind Rovanperä in sixth for TGR WRT Next Generation, even though he had to drive carefully through the afternoon loop after damaging the front of his car.

Having retired on Friday, Elfyn Evans restarted this morning with the challenge of running first on the road. He still set a strong third-fastest time in SS15, before sustaining suspension damage on the following test. He too should be able to rejoin again tomorrow.

Quotes:
Kaj Lindström (Sporting Director)
“It has been a very challenging day with more high temperatures and rough conditions. What happened to Esapekka this morning was very unfortunate, because he was having a great fight and it was a pity that it ended like that. Luckily we were able to fix the car and he can restart tomorrow and still try to take some points. The big positive is that Kalle has once again done a very good job today. His main target was to stay ahead of his main rival and once they dropped out, there was no need for him to try anything crazy. It’s also good to see Taka able to finish the day while managing his issue.”

Elfyn Evans (Driver car 33)
“Today we knew it was going to be a difficult day opening the road and it’s never easy to set good times from the front. So really it was just an opportunity to learn more about the car on gravel and use it as a test session, and everything was going quite OK actually. Then in the penultimate stage unfortunately something broke at the rear after an impact, but we didn’t lose too much from that. Tomorrow the main aim is to see what we can do from our position on the Power Stage and try to take some points if we can.”

Kalle Rovanperä (Driver car 69)
“This morning especially was quite tricky, with low grip and technical stages we couldn’t do too much. But we managed to just keep our own pace and then in the afternoon we could start to be a bit faster. We changed some small things on the car and I was able to find a bit more grip and feeling. That made the afternoon a bit more enjoyable. The plan was to stay out of trouble and this meant we were able to gain some places with others dropping out. Tomorrow the aim will be similar until the Power Stage and then we’ll see what we can do there.”

Esapekka Lappi (Driver car 4)
“This morning we didn’t change the rhythm from yesterday and the beginning of the first stage went pretty cleanly. We weren’t taking any risks. But in this narrow section there was a stone on the ground which threw us off the line – only slightly, but it was enough to make us hit the wall on the right and then a tree on the other side. It is pretty hard to accept because we were not going particularly fast. But this stage is very tricky and narrow and clearly in some places it was pretty rough as well. I had been feeling really comfortable in the car and we will see if we can try to find that feeling again tomorrow.”

What's next?
For the final day there’s a comeback after a year’s absence for the Cala Flumini and Sassari – Argentiera stages on the coast north of Alghero. Both are run twice, with the latter once more hosting the rally-ending Power Stage with its beachside finish. 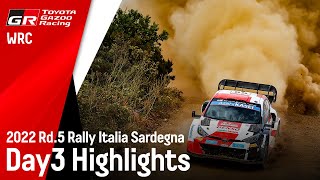