The TOYOTA GAZOO Racing World Rally Team aims to continue the winning run of the GR YARIS Rally1 at Rally Italia Sardegna on June 2-5: The second part of a double-header on rough and rocky gravel roads in southern Europe.

The trip to the Mediterranean island of Sardinia comes hot on the heels of last week’s Rally de Portugal, where the team claimed a one-two finish in the first gravel event of the hybrid Rally1 era. After three consecutive wins on three different surfaces, Kalle Rovanperä leads the championship by 46 points, with Elfyn Evans up to fifth in the standings after taking second place in Portugal. Esapekka Lappi returns to action in Sardinia where he finished on the podium with the team in 2018. Takamoto Katsuta will once more line up for TGR WRT Next Generation, having climbed to third in the points when he narrowly missed out on a podium in Portugal.

Sardinia’s stages are characterised by fast but narrow tracks which are lined with bushes, trees and rocks, leaving little margin for error. The sandy surface gets swept away by each passing car to expose a rocky and abrasive base, which can combine with some of the highest temperatures of the season to provide a tough test for cars and tyres.

The service park returns to the seafront in Alghero on the island’s northwest after one year in Olbia in the east, which will still hold the start of the rally on Thursday evening complete with a new mixed-surface super special stage. Friday and Saturday are made up of familiar roads from recent years, with one pair of stages run to be run twice in the morning before another two tests are repeated in the afternoon. Saturday’s leg will be tackled without a midday service, which has been replaced by a tyre fitting zone. For Sunday’s conclusion there’s a comeback after a year’s absence for the Cala Flumini and Sassari – Argentiera stages on the coast north of Alghero, with the latter once again hosting the rally-ending Power Stage.

Quotes:
Jari-Matti Latvala (Team Principal)
“Portugal was a fantastic first event on gravel for the GR YARIS Rally1 and the team can go to Sardinia knowing it has built a fast and reliable car. But we know it won’t be easy to achieve a similar result. In Sardinia we can expect higher temperatures and the road surface is harder with lots of loose rocks. The road-sweeping effect is usually greater and will probably penalise us more than it did in Portugal. But Kalle is obviously in incredible form at the moment and I’m sure that Elfyn will also feel a boost to his confidence after his drive last weekend. Finally, Esapekka returns to our line-up and has gone well in Sardinia in the past, so with a good road position I’m sure he will be fast too.”

Elfyn Evans (Driver car 33)
“It was good to get a strong result on the board in Portugal and although I wasn’t fully satisfied with the weekend, it gives us something to build on in Sardinia. As a team we showed that we have a great starting point with the car on gravel and I think we can still improve some things for the next event. It helps to have two rallies in succession that are relatively similar in character, although the roads in Sardinia tend to have a harder base than the typical stages in Portugal. The weather is likely to be even hotter, so it is going to be a challenging weekend for the cars and the drivers.”

Kalle Rovanperä (Driver car 69)
“Sardinia will be another tough rally. The stages there have been tricky for me in the past but last year I had a better feeling even though we had some issues during the weekend. Hopefully this year we can enjoy the stages and be fast. If the conditions are hot and dry like normal, I think it could be more difficult for us to fight for the win from first on the road than in Portugal, but the target will be the same: to do the best job we can. We go there knowing that we have a good base with the car on gravel and although we need to focus on making it even better, we are already in a good place.”

Esapekka Lappi (Driver car 4)
“It was great to see the performance of the GR YARIS Rally1 on gravel in Portugal and this has certainly made me more excited for next week. Of course I’ve not had as much time in the car on gravel as the others but the feeling has been good so far and it looks like the team has done a really good job. I’ve always liked going to Sardinia; the location and the weather is really nice and I had some good rallies there when I was last with the team. So I’m really looking forward to it. Our starting position will be good for the Friday and I hope we can fight for the top four or even a podium.” 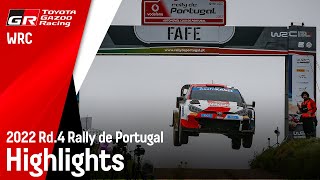